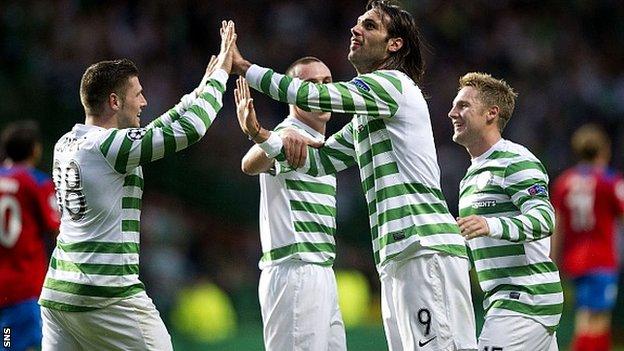 Celtic reached the Champions League group stage for the first time in four years following a comfortable victory over Helsingborgs.

Ahead 2-0 from the first leg in Sweden, Celtic increased their advantage when Gary Hooper poked home on 30 minutes.

James Forrest slammed a shot against the post late in the second half.

Visiting keeper Par Hansson made a good double save to deny Scott Brown and Tony Watt but could not keep out Victor Wanyama's powerful header.

Celtic can now look forward with relish to and more Champions League nights to savour.

Celtic Park rocked to the sound of a boisterous crowd, revelling in their return to the biggest stage of all in club football.

Manager Neil Lennon had stressed to anyone who cared to listen since the full-time whistle in Sweden a week ago that getting there was far from a formality.

And Helsingborgs looked lively in the opening stages, enjoying plenty of attacking possession.

But a wayward Alejandro Bedoya shot was as close as they came to troubling goalkeeper Fraser Forster in the first 15 minutes.

Georgios Samaras almost put the tie to bed just after the 20-minute mark. The Greek forward brushed aside two defenders as he burst down the left, but his attempt to curl the ball in at the far post instead nestled comfortably in Hansson's grasp.

That seemed to spark Celtic into life and the crowd claimed vociferously for a penalty as Forrest's mazy run ended with the winger tumbling under Joseph Baffo's challenge, but play was allowed to continue.

Moments later a Samaras cross had to be turned over the bar by Hansson, and from the corner Celtic moved in front.

The ball fell to Brown on the edge of the box, his miscued shot landed at the feet of Samaras, who tapped it into the path of Hooper and his shot squirmed in off the post as the visitors claimed desperately and unsuccessfully for offside.

There were fully 51 minutes on the clock before Forster was forced to make a save, but it was a good one when it came.

Jere Uronen rifled a 30-yard free kick goalwards, but the keeper pushed it round his left-hand post for a corner.

Another fine chance fell Helsingborgs' way shortly afterwards, but Nikola Djurdic shot tamely into the side-netting before Forster required two attempts to gather a fierce drive from May Mahlangu.

The second half had begun much like the first, with Celtic seemingly content to allow the Swedes lots of possession, the difference being the visitors were now creating genuine chances.

They could, though, have found themselves down to 10 men after 62 minutes. David Accam, on the field for a matter of seconds as a substitute, crudely took Emilio Izaguirre out of the play but was shown leniency and just a yellow card by the Spanish referee Carlos Velasco Carballo.

Forrest was denied a superb goal by the upright of Hansson - the winger's sweet strike rattling back into the path of Hooper, who was wrongly flagged for offside, though he only hit the other post in any event.

Another thrilling move started by Forrest ended with Brown and then substitute Watt being denied by good stops from Hansson.

But that only delayed the second goal momentarily, as Wanyama rose to head past the keeper from the corner that followed.

It rounded off another highly professional job by Lennon's side, who can now begin to contemplate what lies in store.