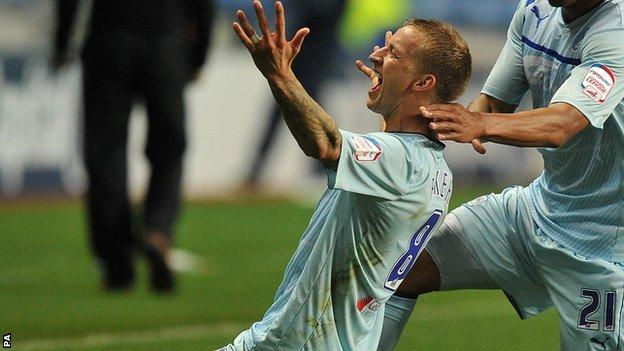 Carl Baker's extra-time winner for Coventry knocked Birmingham out of the League Cup at the second-round stage.

But an assured Cody McDonald strike and Kevin Kilbane's rifled shot put the Sky Blues ahead before Jonathan Spector drove in an equaliser.

In extra time, the visitors failed to clear a cross and Baker took advantage by swivelling and striking the winner.

League One Coventry had parted company with manager Andy Thorn on Monday and Richard Shaw and Lee Carsley took charge of the first-team.

They watched as the Sky Blues got off to the worst possible start with Lovenkrands being left unmarked to head the Championship side in front.

Blues striker and ex-Coventry player Marlon King was booed by the home fans but he helped set up a chance for Chris Burke.

King cut the ball back for his team-mate only for Burke's shot to come back off the crossbar.

Coventry survived the scare and went up the other end and equalised when Kilbane slid a pass into the run of McDonald, who drove in a shot.

Veteran Kilbane put the Sky Blues ahead when he smashed home a shot after Baker's cross.

Spector ran from the halfway line and played a one-two with Morgaro Gomis before powering in to level.

The game went into extra time and Baker's effort was enough to earn Coventry some respite from their troubles.