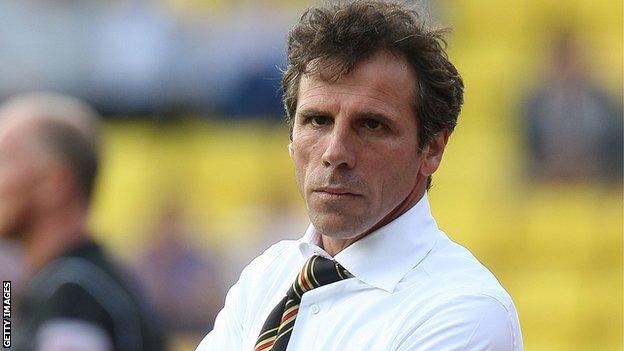 League Two Bradford knocked Watford out of the Capital One Cup as Garry Thompson struck a dramatic late winner.

Bradford equalised with six minutes remaining when the hosts failed to clear a long ball into the area and Kyel Reid lashed home.

And, with the game heading to extra time, Thompson drilled home the winner to put the Championship side out.

Gianfranco Zola made nine changes to his Watford side and initially they struggled to get a foothold in the game.

Alan Connell gave the home side a scare in the 18th minute when his shot came back off the post, while Zavon Hines was denied a penalty when Martin Taylor clipped his legs as he attempted to put in the rebound.

It was the Hornets who took the lead, however, with less than 20 minutes remaining when Anya's half volley from distance flew beyond Bradford keeper Jon McLaughlin.

But Bradford levelled when Reid fired home after Watford had failed to clear before Thompson stole victory three minutes into stoppage time with an effort from 15 yards.

Watford boss Gianfranco Zola: "What can I say. It's tough to take it in but you have to accept it.

"I was pleased with the performance - nothing to say to my players - it was just a pity the end was like that. But other than that, it's been a good game for us.

"I believe we played the game the way we had to play and to be honest, we deserved more than that but that's the cruelty of football sometimes. You have two set-plays and they can change the game."

Bradford boss Phil Parkinson: "I thought the lads were terrific tonight. It was a really difficult game coming here and as it got nearer to it we started relishing it more and more.

"I made a few changes, some enforced, a few in terms of thinking about the bigger picture and I thought the lads who came in played really well for us tonight."