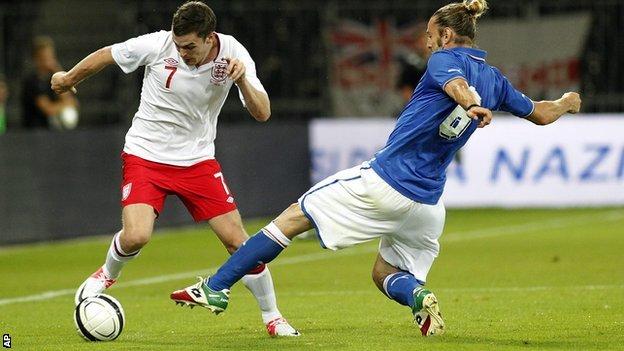 The 25-year-old made just 10 league starts last season and is likely to be sold before the transfer window shuts.

Sunderland are the only club to submit an offer so far, but Tottenham and Liverpool have made enquiries.

If the England international does leave Etihad Stadium, it is understood City will step up their interest in Swansea forward Scott Sinclair.

Tipped for the top

When Johnson was 10 he played at Wembley in a schools competition. Former England international Johnny Haynes, who watched Johnson score twice in the finals, is said to have been very impressed. He told the youngster: "You're a great little player. You've got a lovely left foot."

Johnson joined City from Middlesbrough in February 2010 and has scored 15 goals in 97 games.

But 43 of those appearances have come as a substitute and boss Roberto Mancini is open to the idea of letting him move on.

"Adam can have a future here but you should also understand when you are 23 or 24 years old, you want to play," the Italian said.

"If you are at a top team, you can't always do that, so if he wants to, he has to leave. If we can find a good solution, maybe it is better.

"But if that happens I will be so sorry because Adam is a good guy.

"He is a different player to the other strikers and wingers and maybe he could be important for us."

Johnson started England's victory over Italy last Wednesday but did not feature in City's 3-2 win against Southampton on Sunday.

Sunderland were understood to be the leading contenders to recruit Johnson before Tottenham and Liverpool made their interest known.