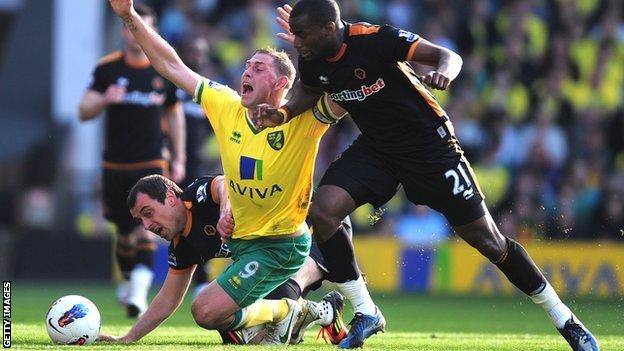 Norwich have signed defender Sebastien Bassong from Tottenham on a three-year deal for an undisclosed fee.

The Cameroon international spent the second half of last season on loan at Wolves.

Bassong is a graduate of the Clairefontaine national youth academy in France which has produced Thierry Henry and Nicolas Anelka. Although he is French born, he has 15 caps for Cameroon.

Norwich manager Chris Hughton said: "He will give us power and pace at the back and add to the competition in the squad."

Bassong first worked with Hughton when he joined Newcastle from FC Metz in 2008, and said the prospect of linking up with the former Birmingham manager again attracted him to Carrow Road.

"He was the first man to give me a training session in England when I came from France," said Bassong.

"He knows me really well and so I am very happy to work for him again.

"This is a really good thing for me to join this club and I am looking forward to playing for the team."

Bassong began his career with FC Metz before moving to Newcastle for £500,000.

He joined Spurs in 2009 and made 45 Premier League appearances for the north London club.

Hughton added: "Sebastien is a player that I have known well since my time at Newcastle and I'm delighted to have brought in someone with the Premier League experience he has got."