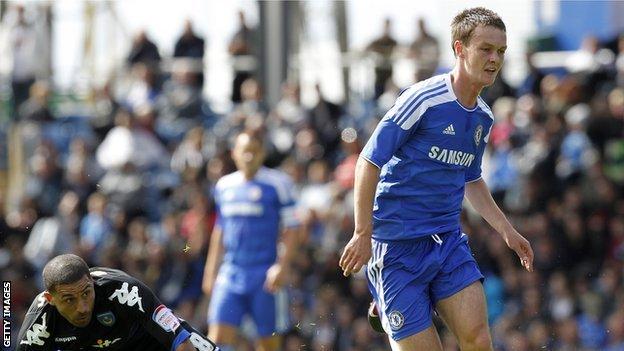 England Under-21 midfielder Josh McEachran has signed for Championship side Middlesbrough from Chelsea on a season-long loan deal.

The 19-year-old made his Chelsea debut in 2010 and went on to win the Blues' young player of the year award.

"It's part of a player's development that you have ups and downs and you learn all the time."

The central midfielder struggled to break through at Chelsea and spent the second half of last season on loan at Swansea City, where he made five appearances.

Di Matteo continued: "The best solution is to get in that rhythm of playing every week and get back to where he was when he broke into the first team."

The new Boro signing won the European Under-17 Championship in 2010 and made his debut for England Under-21s at 17 years of age.

Middlesbrough manager Tony Mowbray told BBC Tees there had been a lot of competition for McEachran's services, including from Premier League clubs.

"He's a very technical footballer, very creative, with a big future in the English game - I can see him being a top, top player in a few years.

"Hopefully his ability will rub off on our team. He can see passes, he can pick a pass and I'm sure he will come and help our cause.

"The competition was stiff, but the boy felt as though he wanted to come and play some football and I think we can help him do that. He went to Swansea last year and didn't play.

"I'd like to think he and Chelsea appreciate the reputation we have for playing a certain way - they feel he is going to come to a team that will pass the ball.

"But let's wait and see - just because he's from Chelsea doesn't mean we have signed Lionel Messi. He's a very young boy with bags of talent and he has to now apply it on the stage of the Championship."

McEachran will be available for selection for the Teessiders' home game against Burnley on 21 August. Mowbray confirmed the season-long deal has a break clause in January for both sides.