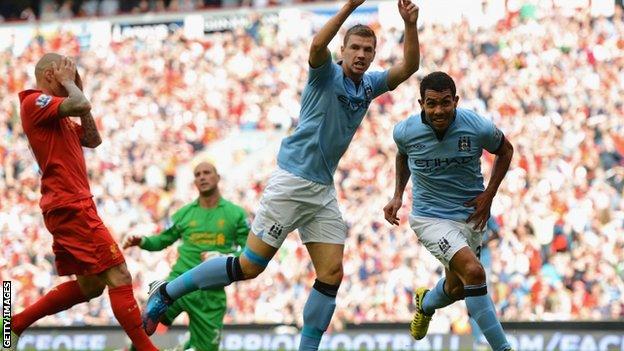 Liverpool looked on course to give new manager Brendan Rodgers his first Premier League victory until defender Skrtel directed a backpass straight to Carlos Tevez, who took full advantage of the gift to score with 10 minutes left and grab his 100th goal in English football.

Skrtel's powerful header gave Liverpool a lead they fully deserved at half-time - only for another defensive mix-up to hand Yaya Toure a scrambled equaliser for Roberto Mancini's side after the break.

Luis Suarez's precise free-kick restored Liverpool's advantage, but Skrtel's mistake handed City a reprieve in a moment that saw Rodgers slump into his seat on the sidelines in despair.

City will be grateful to leave Anfield with a draw after a mediocre display, while Rodgers can take plenty of solace in a Liverpool performance that showed plenty of encouraging signs and indications that his players are buying into his philosophy.

The biggest positives for Rodgers came in the shape of an exciting league debut from 17-year-old Raheem Sterling, and the manner in which the assured Joe Allen dictated the tempo and controlled possession in midfield.

Rodgers demonstrated his willingness to put his faith in youth and hunger when more experienced players fail to deliver - hence his decision to prefer Sterling to £20m Stewart Downing.

And the young winger played his full part in a vibrant first-half display from Liverpool as City struggled to pick up the pace of the game.

Sterling was causing problems for Kolo Toure, selected ahead of Joleon Lescott, and he should have provided Liverpool's opening goal. He delivered a teasing cross that found Fabio Borini at the near post, but the Italian could only bundle his effort wide from eight yards.

City's response came via Tevez, whose industry in the opening exchanges was in stark contrast to the laboured efforts of Mario Balotelli as he attempted to fill the gap left by the injured Sergio Aguero.

And he was almost on the mark when he forced the ball past Liverpool keeper Pepe Reina from an acute angle but the ball rebounded to safety off an upright.

Liverpool, who lost Lucas to injury in only the fourth minute, were showing the sharpness in possession that Rodgers wants to make his trademark with Allen, his £15m signing from Swansea City, a prominent figure.

They were pressing City back and thoroughly deserved the lead they were given by Skrtel after 34 minutes. The defender rose majestically to meet Steven Gerrard's corner and thump an unstoppable header past City keeper Joe Hart in front of the Kop.

City's sloppiness in possession almost cost them again early in the second half when Borini broke clear to set up Suarez but the Uruguayan could only steer a half-hit effort well off target.

Mancini made a double change in an attempt to galvanise his team, with Jack Rodwell and Edin Dzeko replacing Samir Nasri and Balotelli - with the intention of allowing Yaya Toure to become more of a threat.

It worked almost instantly as Toure took advantage of poor defending from Liverpool when they failed to deal with Tevez's cross, turning from close range against the run of play.

City were only on terms for three minutes before Liverpool restored their advantage. Rodwell was penalised for handling Gerrard's effort and Liverpool's captain left it to Suarez to sweep a 25-yard free-kick low into Hart's bottom left hand corner.

Liverpool had regained the initiative but were denied all three points when Skrtel allowed City to claim a draw.