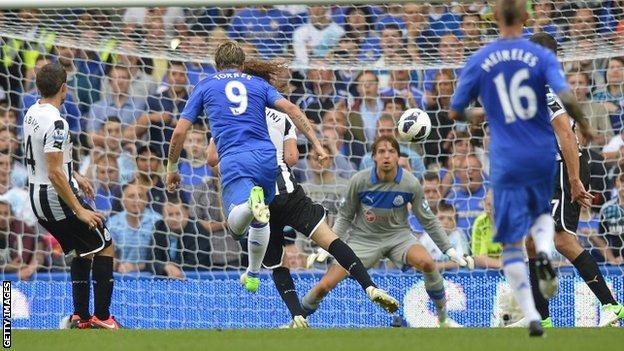 Fernando Torres produced a masterclass in forward play to help Chelsea to a deserved victory over Newcastle.

The Blues attack were at their fluent best, with £32m signing Eden Hazard scoring his first goal for the club when he converted from the spot after Torres was fouled by Vurnon Anita.

The Spain striker made it 2-0 before the break, latching on to Hazard's backheel to rifle in from 18 yards.

The goals were enough to send the Blues to the top of the Premier League table.

And on this performance, Chelsea, who have now won their first three league games, must now be regarded as serious title challengers.

Ever since Roberto Di Matteo took charge of team affairs last March, the club's rise from their rut has been remarkable. And one player who has benefited greatly from the change in management is Torres.

The Spaniard ended his 24-game goalscoring drought when Andre Villas-Boas was replaced and was then influential in guiding Chelsea to the Champions League title and helping Spain retain the European Championship.

And on Saturday, under dark rainclouds at Stamford Bridge, Torres once again shone brightly.

His first contribution came midway through the first half, when he outwitted Davide Santon with a change of pace before he was tripped in the area by his next obstacle, Anita.

Hazard, who along with Juan Mata and Torres, graced the pitch with numerous magical moments, converted low to Tim Krul's right.

The Belgian playmaker then provided the key touch for Torres as he delivered a powerful strike past the reach of Newcastle Dutch keeper for Chelsea's second. It was the Spaniard's sixth goal in nine games for club and country.

The Blues' defence was barely tested in the first half, but were made to work a little harder after the break.

He was rarely given a sight on goal though, and when he did on one occasion, the former Marseille player dragged his low shot wide of Petr Cech's left-hand upright.

Demba Ba, who scored in Newcastle's opening-day victory over Tottenham, had the Magpies' best chances - forcing two good saves from Cech and heading over from six yards.

Unlike at the end of last season, there were to be no jack-in-the-box moments from Newcastle striker Papiss Cisse, who had a very quiet game. Such memorable moments were provided by the Chelsea number nine instead.