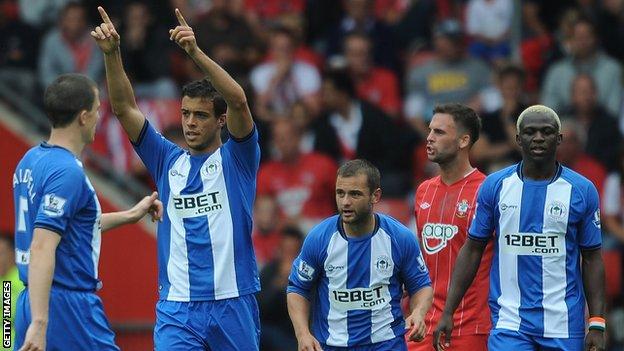 Franco di Santo rifled into the roof of the net for a Latics side without Victor Moses, whose move to Chelsea went through on Friday.

Arouna Kone then robbed Jose Fonte near the halfway line to secure the points.

The match was the Saints' first home game since their 27-year stay in the top flight was ended in May 2005.

Neither side could create any notable chances in the opening stages, before England Under-21 international Lallana took things into his own hands and produced a stunning save from Ali Al Habsi as the Wigan goalkeeper used all his 6ft 4in frame to tip the 25-yard drive onto the bar.

The dismal play on the pitch was soon reflected by the weather as heavy rain fell towards the end of the first half.

"These games are so important to the clubs who are expected to be in the middle or lower parts of the table. Wigan looked comfortable towards the end of the second half. They kept clean sheets in their first and last away games last season, and they looked very secure today. After today, Southampton now know what the Premier League is all about."

Whatever the managers said at the interval had an immediate effect, as Rickie Lambert - who scored 27 goals in the Championship for Southampton last term - forced Al Habsi into a smart save from a header before Di Santo opened the scoring for the visitors a minute later.

The Argentine ran onto an incisive through-ball by a twisting Shaun Maloney and powered his shot into the roof of Kelvin Davis's net from a tight angle.

Lambert was carrying all Southampton's attacking threat and, after he forced another save from Al Habsi with a low shot from 25 yards, he turned creator as his cross was headed onto the bar by centre-back Hooiveld.

Wigan's defence was torn apart by Chelsea at times last Sunday, but summer signing Ivan Ramis - so badly exposed by Eden Hazard last weekend - helped them to hold firm and keep successive away home clean sheets for the first time in a year.

Moses had produced the spark in the Wigan team that lost just two of their final seven away games last season as they stylishly avoided the drop, and his absence appeared obvious for much of the game as Kone struggled to make an impact.

This was to change in the final minute of normal time as the Ivorian finally showed the finishing ability that saw him score twice against La Liga champions Real Madrid for former side Levante last season as he robbed the hesitant Fonte and slotted into the net with aplomb.

"The Premier League is a relentless division. We had opportunities and didn't take them. You have to be ruthless, the harsh reality is you will be punished if you are not.

"Wigan scored their two goals with good finishes and our goalkeeper Kelvin Davies had nothing else to do but pick the ball out of his net.

"Goals change games, and 1-0 down with 20 minutes to go, you change your formation to get back into it; that is my responsibility.

"I am delighted, as we knew we were coming in the worst possible moment to play them due to their winning momentum from their achievements to get into the Premier League. They put us under massive pressure early on, and from then on we composed ourselves and slowly grew into the game.

"It was a well worked performance and we had to be perfect in many aspects.

"The strikers live on great finishes and scoring goals. They did huge jobs for the team, and the goals were their reward."