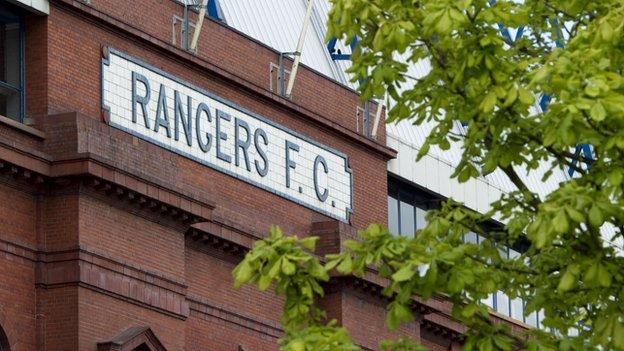 Charles Flint QC and Nicholas Stewart QC will join Nimmo Smith to look into the use of employee benefit trusts under the previous Ibrox owners.

The commission will determine whether or not SPL rules were broken.

The SPL says the three men will have powers to determine what sanctions, if any, are appropriate.

The Ibrox club's use of the EBT scheme was the subject of a tax tribunal, which has yet to deliver a verdict.

EBTs were administered by the company that formerly ran Rangers and is now in the process of being liquidated.

And BBC Scotland has seen evidence, which was submitted to the courts, suggesting that 53 Rangers players and staff had side-letters giving undertakings to fund their sub-trusts with cash.

Scottish Football Association and SPL rules state that all payments made to players in respect of their earnings from football must be declared by their club.

However, Sir David Murray, who owned a controlling interest in Rangers from 1988 to 2011, strenuously denies any wrongdoing.

"During my stewardship of Rangers, no rules were breached or circumvented and I reject and resent any suggestion that anything was done which amounted to cheating," said Sir David via a statement on 6 August.

"All accounts were fully audited and made available to all entitled parties.

"All football rules were complied with. All enquiries from entitled parties or organisations were answered."

Nimmo Smith chaired an earlier SFA investigation into rule breaches at the Ibrox club, ruling that Rangers had brought the game into disrepute and that former owner Craig Whyte was not a fit and proper person to hold a position within association football.

The findings from his report led to a £160,000 fine and a year-long signing ban being imposed on the Ibrox club.

Nimmo Smith is a former senator of the College of Justice and has served as an insolvency judge.

In 2002, he was one of five judges who heard the appeal of Abdelbaset al-Megrahi, the man convicted of the 1988 Lockerbie bombing, at the Scottish Court in the Netherlands.

Flint is a commercial barrister, arbitrator and mediator specialising in banking and financial services who has wide experience in sports law.

He was this year appointed by Uefa to the European football governing body's club financial control body adjudicatory chamber and has acted for players and sports organisations, including rugby unions, Grand Prix teams, the International Tennis Federation, the British Athletics Federation and the Football League.

Flint is vice-president of the National Anti-Doping Panel and was chairman of the disciplinary panel appointed by UK Athletics in the case of Dwain Chambers in February 2004 and a member of the Ethics Advisory Group established as part of the London 2012 Olympic bid.

Stewart, who has sat as deputy High Court judge since 1992, is an appeal board chairman and specialist member of the Football Association judicial panel.