Robin van Persie has completed his £24m move from Arsenal to Manchester United.

The Dutch striker, 29, has signed a four-year deal and could make his debut at Everton on Monday.

He said: "It's an honour to sign for Manchester United.

"I am looking forward to following in the footsteps of so many great strikers, bringing my experience and playing my part to help the team compete for the biggest trophies in the game. I can't wait to get started."

"Robin is a world-class striker with a proven record in England and in European football.

"His talents need no introduction to our fans. He has scored a number of goals against us in some classic battles with his former club. His movement, finishing and all-round ability are outstanding.

"We never thought we could get Van Persie. If you go back six months ago, I couldn't see us getting him.

"I thought Arsenal are not going to let him go. When I read he had refused a new contract, that is when we acted. It has been a long haul."

"I can't elaborate but it was amicable," said the Scot. "Arsene knew the boy wanted to leave. He knew he wanted to join us. That made it a bit easier but not in terms of trying to reduce the fee.

"[Wenger] could run a poker school in Govan. He got a great price but we are also happy the matter is concluded.

"From the starting position when we first started negotiating, Arsene has done well."

Van Persie said there were "no hard feelings" against his former club.

"It's just uncertain elements that we had a different view on. That's life. No-one is angry at me and I'm not angry at them," he said.

Van Persie announced in July he would not extend his existing Arsenal deal, which was due to expire in June 2013.

It is understood Arsenal were willing to make Van Persie their highest paid player ever, but never actually offered him a new contract.Juventus and Manchester City also bid for the striker, but it is understood that of the three, United were the only side Van Persie would have considered joining. 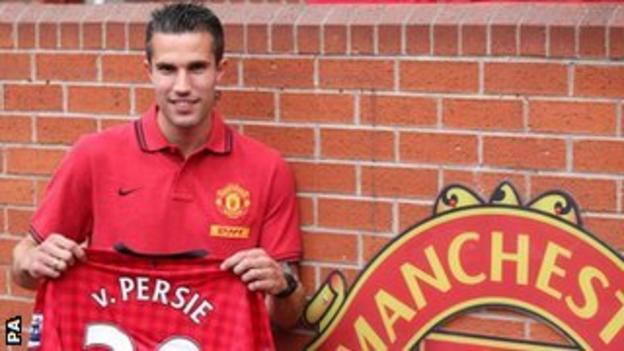 Wenger admits he was frustrated to see Van Persie leave but said he could do little to stop him going.

"I have regrets. We have lost a good player because of a simple reason," he said.

"He only had one year left on on his contract and he wanted to go.

"We lost a good player, a world-class player - I don't deny that. But it is a massive challenge to replace him and therefore we have to be even more of a team and work even more together to compensate."

United will pay £22.5m, with a further £1.5m one-off bonus to follow if they win a Premier League or Champions League title in the next four years.

The Netherlands international scored 44 goals in 57 games for club and country last season.

Van Persie was named Professional Footballers' Association and Football Writers' player of the year, but scored only once as the Netherlands were eliminated at the group stage of Euro 2012.