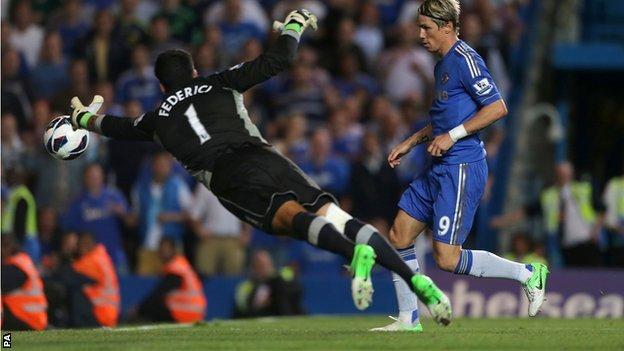 Chelsea avoided a major upset as they came from behind to overcome a brave Reading at Stamford Bridge.

A Frank Lampard penalty put the home side ahead before Pavel Pogrebnyak's steered header levelled matters.

Blues keeper Petr Cech fumbled a Danny Guthrie free-kick into his own net to gift Reading a shock lead.

"A very spirited display from Reading. They've done themselves proud in many ways. It was a patchy performance from Chelsea. The strange thing is that we've seen six goals but not that many goal efforts."

Gary Cahill's shot hauled Chelsea level and, after Fernando Torres tapped in when he appeared offside, Branislav Ivanovic got a fourth for the Blues.

In such an enthralling and absorbing game, it was a shame that what appears to be a mistake by the linesman for Torres's goal played such a crucial role in the eventual result, and undid so much of Reading's good work.

The Royals were on the verge of a famous upset against the European champions for much of the game and, while there was an element of fortune for Chelsea, they will see it as reward for their pressure and perseverance.

And, although the victory moved them to the top of the Premier League for the first time since November 2010, there was little sign of what was to come early on when Chelsea had a classy and authoritative air about their play.

They had Reading rocking and, if Ramires had squared the ball to an unmarked Torres rather than go for a left-foot shot which was saved, Chelsea might have been ahead sooner.

Torres epitomised the confidence oozing through the home side when he nutmegged Jem Karacan and ghosted past a defender before his shot was diverted wide by centre-back Alex Pearce.

The goal Chelsea had threatened to produce finally came when the speed and subtlety of Eden Hazard's footwork mesmerised Chris Gunter into bringing the Belgian down.

Lampard smashed in the resulting penalty but, rather than Chelsea going on to overwhelm the Royals, the home side were stunned by Reading's fightback.

Width was the visitors' strength and, when Garath McCleary drilled in a cross, Pogrebnyak's expert header to the far post was beyond Cech's reach.

The equaliser helped the visitors grow in stature and, if Cech had little chance with Reading's opener, he was at fault for their second.

Chelsea skipper John Terry cynically fouled Jobi McAnuff and Guthrie's low, driven free-kick was spilled by a sprawling Cech into his own net.

Reading were showing no respect or reverence to their more illustrious hosts and a rattled home outfit might have gone further behind had an unmarked Pearce managed to get on the end of Ian Harte's diagonal free-kick.

Hazard, who had two assists on his Premier League debut in the win over Wigan, has adapted quickly to the top-flight and he set up Torres for a chance the Spaniard headed disappointingly wide.

Reading were holding their own but, as Chelsea exerted more pressure, the visitors eventually succumbed, although Adam Federici will feel he should have had stronger hands to palm Cahill's 25-yard shot wide.

Chelsea's passing and probing helped them engineer a lead with a third goal when Ashley Cole slid the ball across for Torres to sidefoot in, although there was more than a hint of offside about his position.

Ivanovic's effort came when he was set up for an easy finish by Hazard with Royals keeper Federici stranded after going up to the Chelsea end for a corner as the visitors searched for an injury-time equaliser.

"It was a very entertaining game for the supporters. We started very well, certainly until they equalised which knocked us back a bit.

"We kept them under pressure and luckily got the equaliser which galvanised us and we kept going forward.

"I've not seen the replay [of the Torres goal]. I looked at the linesman straight away and he gave the goal.

"We are very pleased with six points after two games."