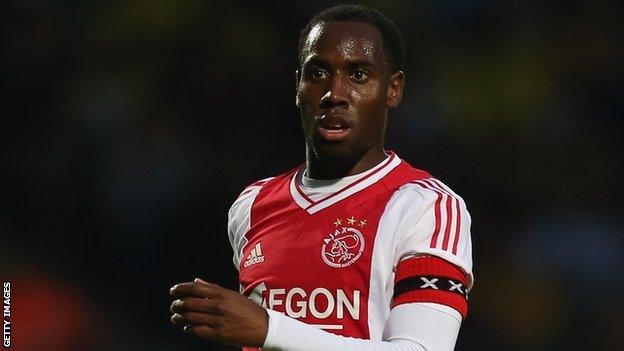 Vurnon Anita has completed his move from Ajax to Newcastle United on a five-year contract.

The fee for the Netherlands international has not been disclosed but has been reported as £6.7m.

Anita, 23, played most of his early matches at right-back for Ajax, but more recently operated as a midfielder.

"I talked to the manager and the coach and they know that I want to play in a defensive midfield place and that's why they brought me here," he said.

"But I can play at left-back or right-back, so that's also no problem."

Anita came through the ranks at Ajax after his family moved to Holland from the island of Curacao.

Last season he scored two goals in 33 league appearances as Ajax won the Eredivisie for a 31st time.

However, now he wants to help the Magpies win trophies after his successful time with Ajax.

"I won almost everything in Holland so the step was not difficult to make. Now I think we can also win trophies with Newcastle and it's time to do that," Anita told the club's official website.

"In the Premier League especially, every game is tough so it can help me also to grow in my football skills."

Newcastle manager Alan Pardew believes the versatile Anita will fit straight into his plans ahead of their season opener against Tottenham on Saturday.

"He has come through the Ajax youth system which is world renowned for bringing up players the right way, and I am sure he will fit seamlessly into the squad of players we have here," said Pardew.

Anita is the fourth player to arrive at St James' Park since the end of the season. He joins Romain Amalfitano, who signed from Stade de Reims, Gael Bigirimana from Coventry and former Melbourne Heart defender Curtis Good in moving to the North East.