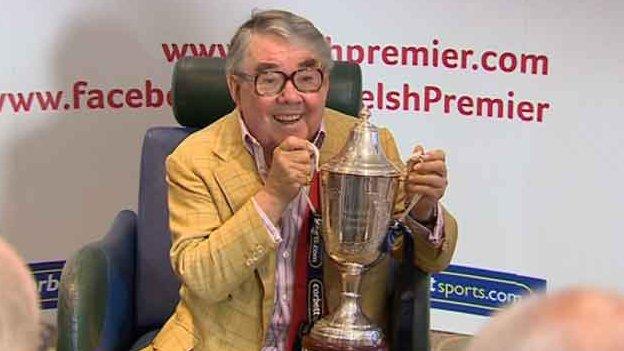 The Welsh Premier League has taken the unusual step of asking comedian Ronnie Corbett to promote the forthcoming 2012-13 season.

Corbett, 81, was alongside Wales manager Chris Coleman as the Football Association of Wales launched the new campaign at a Cardiff hotel.

Corbett, best known for starring in the BBC's TV sketch show the Two Ronnies alongside his late comedy partner Ronnie Barker, said he grew up supporting Hearts in Edinburgh and then followed Crystal Palace while living in south London.

He said he and Welsh friend Brian Huggett, 75, a six-time Ryder Cup golfer who won 16 European Tour events, were both Palace supporters.

"Brian Huggett, who is of course, a very Welsh person and dear friend... and I would go and see Palace in the days of Malcolm Allison, Bert Head, so going back a bit," he said.

"I used to play every Sunday in the Showbusiness XI," he added. "We went and played charity matches with local amateur sides."

Both team will be in action on Friday, with Bangor hosting newly promoted Connah's Quay Nomads.

The other match on the opening day sees Newtown travelling to Bala Town.

After winning the league title, TNS went on to win the Welsh Cup with a 2-0 win over Cefn Druids.

They lost 3-0 to Helsingborg over two legs in the Champions League second qualifying round in July after holding the Swedish side to a goalless draw in the opening clash.

Cefn Druids suffered a 5-0 aggregate defeat by Finnish side MyPa, having drawn 0-0 in the home leg.