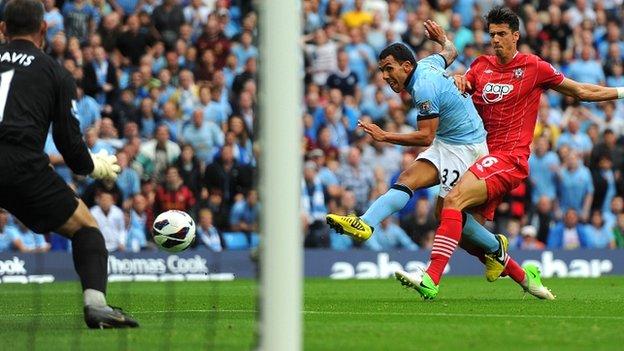 Manchester City began the defence of their Premier League title in similarly dramatic fashion to that in which they won it - this time with a thrilling victory over Southampton.

City secured the championship three months ago with and once again relied on a late flurry to make sure they started the new campaign the way they finished the last.

After Carlos Tevez had put City ahead, Rickie Lambert and Steven Davis replied to give the newly promoted Saints a surprise lead with only 20 minutes left.

But the champions fought back to level through Edin Dzeko before Samir Nasri struck 10 minutes from time, leaving Roberto Mancini's men to hang on for a breath-taking triumph.

"First day, last day - not quite a carbon copy but levels of drama to almost match what we saw in May. What a second half we've seen. Manchester City do make a winning start to the season and what entertainment the Premier League new boys Southampton have given us."

It was clear almost from the outset that things would not be straightforward for City against a team that was playing in League One only two years ago.

Aguero scored 23 top-flight goals last season, including the dramatic injury-time strike against QPR that gave his side the title in the last minute of the last day of the campaign.

The drama that followed after the Argentine striker was stretchered off against the Saints was not quite in the same bracket as that momentous afternoon in May but City's fans were still given a rollercoaster ride on their way to the three points.

Aguero had gone down clutching his knee in agony after an innocuous challenge by Nathaniel Clyne and, although he got to his feet, he ended up being carried down the tunnel.

Southampton seemed galvanised by that Davis save and they defended stubbornly until just before the break, when Tevez beat the offside trap to squeeze home his shot inside the post.

The home side created a flurry of chances at the start of the second half but Dzeko and Gael Clichy both missed the target and Silva somehow fired against the bar from close range after being set up by Nasri.

Saints substitute Lambert, the top scorer in the Championship last season, punished them for their wastefulness when he drilled home a loose ball to level out of the blue just before the hour mark.

If that goal was a big surprise to the home fans, they were stunned eight minutes later when Southampton swept forward from a City corner and Davis, who like Lambert had only been on the field a matter of minutes, found the bottom corner from the edge of the area.

Mancini's men responded immediately, with Yaya Toure setting up Dzeko to fire home from close range and bring the City supporters back to life.

That left 18 minutes for City to find a winner, which duly arrived when Clichy's cross bounced into the path of Nasri, who found the net with a fierce drive from 10 yards out.