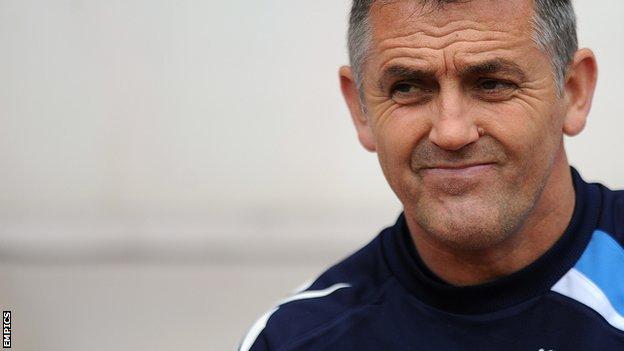 Martin Paterson and Charlie Austin scored either side of the break for Burnley to ensure Bolton manager Owen Coyle suffered a miserable return to Turf Moor.

Coyle left the Clarets in January 2010 and was booed throughout a feisty match, played in an intense atmosphere.

Paterson headed the hosts ahead after an almighty goalmouth scramble.

And Austin added a second from a pinpoint Junior Stanislas cross from the left wing.

Trotters defender Zat Knight had a late header cleared off the line but the visitors were well beaten.

Burnley started strongly and almost went ahead through Chris McCann, and they continued to have the better chances.

Paterson saw a clever lob hit the top of the net and Dean Marney also went close with a well-struck drive that was saved by Adam Bogdan.

Wanderers winger Martin Petrov did volley narrowly over at the other end but the Clarets went ahead when Paterson headed home from close range after blocked shots from both Stanislas and Marney.

The hosts continued to threaten after the interval and Austin deservedly made it 2-0 when Austin was left with a simple far-post finish after great work by Stanislas.

Burnley had opportunities to add to their lead but did not need the cushion of a third goal against a Trotters side who lacked quality in the final third.

"The lads were outstanding from start to finish. I thought there were some gigantic performances from individuals - some great debuts - and I thought we looked like a good side.

"It's only one game so we can't get carried away, but it's certainly a good performance and hopefully it will give the lads a lot of confidence.

"I think everyone looks back to last year and could see at times we would wobble but I didn't think we did that in this game."

"I felt we lost a poor goal. We huffed and puffed without really imposing and I think we had one cleared off the line from Zat Knight at a corner but we certainly didn't create the goalscoring opportunities that I would have wanted.

"I'll have to look at it again but Martin Paterson looked a couple of yards offside when the ball was knocked to him by Charlie Austin. I'll need to see that back and it didn't help but in the second half we were looking to react better to that."