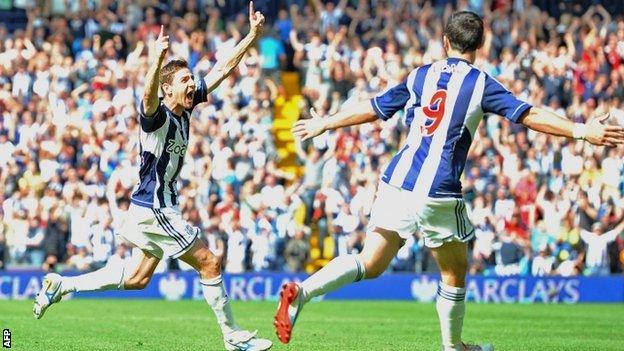 Brendan Rodgers's first Premier League game as Liverpool manager turned into a nightmare as West Bromwich Albion inflicted a heavy defeat on his side at The Hawthorns.

On this evidence Rodgers faces a massive task to restore Liverpool to the game's elite after succeeding the sacked Kenny Dalglish.

"Liverpool have got off to a horrific start. They are up against Manchester City next in the league and if they had got one point the pressure would have been off. To me it looked as though they could have done with some height in the box. But he did not introduce Andy Carroll until the final 10 minutes or so. I would have started him."

In sharp contrast, there was delight for new Albion boss Steve Clarke - sacked along with Dalglish in Liverpool's end of season clear-out - as he watched them produce a display bristling with energy and enterprise.

Zoltan Gera's spectacular strike gave Albion the lead just before half-time - then Shane Long wasted the opportunity to add a second with a weak penalty after he was brought down in the incident that led to Daniel Agger receiving a red card.

Albion were not to be denied and Peter Odemwingie made no mistake from the spot after Martin Skrtel fouled Long to settle the destination of the points.

Liverpool were in tatters at this point, with substitute Romelu Lukaku, on loan from Chelsea, adding a third and Albion missing further chances to give the scoreline an even more emphatic appearance.

It was a brutal wake-up call for Rodgers after so much optimism surrounded the build-up to this opener.

Liverpool's demise will not have the former Swansea manager sounding the alarm bells - particularly as his new charges were guilty of over-generosity in front of goal before Gera's wonder strike gave Albion such momentum.

It also wouldn't have helped that his former club opened the season with a 5-0 victory over Queens Park Rangers under new manager Michael Laudrup.

Rodgers gave debuts to £26m-worth of summer signings in the shape of Joe Allen and Fabio Borini - but both were anonymous as Liverpool gave off the distinct whiff of a team and club entering a period of transition.

Liverpool had plenty of the ball and plenty of opportunities in the first 45 minutes but were undermined by a failing that troubled them throughout last season, namely an inability to convert the presentable chances they created.

Luis Suarez was so sharp as Liverpool's main threat, twice forcing saves from Albion keeper Ben Foster and heading Glen Johnson's cross wide of goal when the Uruguayan should have given his side the advantage.

"For those of a Liverpool persuasion expecting instant rewards from a young manager assuming his biggest task, this was not so much a sharp wake-up call as a kick out of bed and a shove into a cold shower"

Johnson was also wasteful when he shot off target, and an Albion side that was bursting with running and ideas made them pay when they went ahead in stunning fashion as the interval approached.

Liverpool could only partially clear James Morrison's corner, giving Gera the opening to lash a magnificent rising drive past the helpless Pepe Reina from 25 yards.

Suarez's frustrations then got the better of him as he was shown a yellow card by referee Phil Dowd after gesturing angrily in the direction of an assistant following an offside decision.

Albion had the opportunity to double their lead on the hour when referee Dowd awarded a penalty when Long tumbled as he tangled with Agger. The Danish defender disputed the decision and his anger only increased when he was shown the red card.

Reina almost had to wait to receive Long's awful penalty - but Liverpool failed to cash in on the escape as Albion were awarded another spot-kick.

Liverpool again contested the award as Skrtel upended Long after being caught in possession. Odemwingie took penalty responsibilities from Long and drilled Albion's second past Reina.

The numerical advantage was leaving space to exploit and Albion should have used it to add a third when Lukaku brushed substitute Jamie Carragher away from possession with embarrassing ease. The striker squared for Morrison who took aim, only to shoot off target.

The powerful Lukaku was already causing problems for Liverpool's defence and he added the third with 13 minutes left, rising at the far post to meet Liam Ridgewell's cross with a simple far-post header.

After that it was damage limitation for Liverpool - not the state of affairs Rodgers envisaged as the opener to his managerial reign.