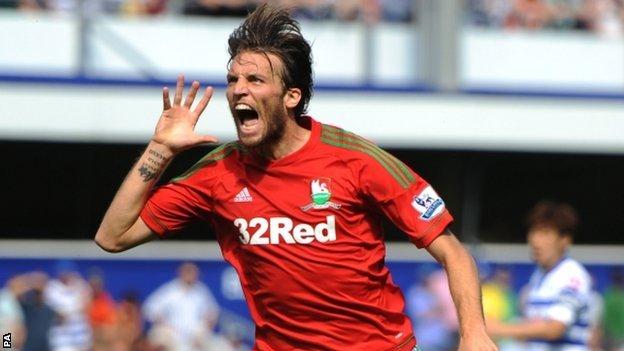 Michu and Nathan Dyer both scored twice to help Michael Laudrup get off to a dream start as Swansea boss with a thumping victory over QPR.

"What an afternoon for Michael Laudrup - the day belongs to him. With the Olympics in mind, could there have been a smoother baton change from Brendan Rodgers?"

Swansea hit the bar twice before Michu curled home his second after the break.

QPR crumbled completely by the end, with Nathan Dyer scoring twice in quick succession before Scott Sinclair completed the rout with a low finish.

The Welsh side put on a passing performance reminiscent of their best form under previous boss Brendan Rodgers, in what will go down as a perfect Premier League bow for their new Danish manager.

The result would have been particularly sweet for Swansea fans, with Rodgers's new team

For QPR fans, the day was a horrific case of deja vu as they saw their side collapse to a comprehensive opening-day defeat against Bolton at Loftus Road last August.

Things were meant to be different this time, with Rangers boss Mark Hughes fielding a raft of summer signings and promising there would be no repeat of last season's relegation struggle, which his side only just survived.

But a new-look Rangers kicked off the new campaign with the same sort of defending that haunted their first season back in the top flight, starting with Green's gaffe eight minutes into his debut.

The former West Ham keeper got his hand to Michu's low first-time effort from the edge of the area but could only help it into the bottom corner.

The hosts initially responded well and were only denied an immediate equaliser by a superb reaction stop from Michel Vorm to keep out Jamie Mackie's close-range effort, Adel Taarabt's pass having ricocheted into his path.

Another QPR new-boy Junior Hoilett cut in from the left-hand side to fire a rasping shot wide before Vorm pushed away a fierce Taarabt effort that was heading for the bottom corner.

Swansea were undoubtedly on the back foot as half-time approached but their travelling supporters saw signs of what was to come when Chico and then Michu hit the bar from corners.

Eight minutes into the second half, Rangers were again found wanting at the back when Wayne Routledge broke forward and set up Michu to expertly bend the ball into the top corner.

Another counter-attack saw Routledge tee up Dyer to make it 3-0 and the home defence was nowhere to be seen when Dyer met a lobbed pass from substitute Kemy Agustien to make it four.

By now, Laudrup was assured of a victory in his first competitive game in charge, but Sinclair added further gloss with his late strike.

The former Chelsea winger, who has rejected a new contract and appears set to leave the Swans, came off the bench to smash a low shot past the beleaguered Green from the edge of the area.