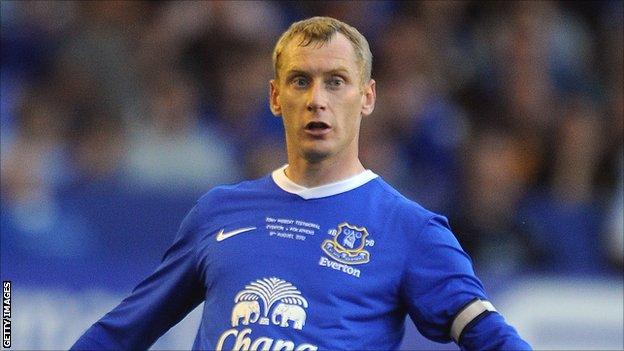 Tony Hibbert has described scoring in his testimonial match as "a fairytale".

Full-back Hibbert, who has failed to find the net in 308 appearances for Everton, scored a stunning free-kick in Wednesday's 4-1 win over AEK Athens.

He told BBC Radio Merseyside: "The lads were saying to me in the changing room that it was like a fairytale.

"I'd said to Leighton Baines earlier on that I was on free-kicks. All the fans were asking me was if I was going to score, I hit it well and it went in."

Hibbert's testimonial was in recognition of more than a decade in the Everton first team. He equalled the club record for the most European appearances, a record he later broke, against AEK Athens in 2009.

Manager David Moyes added: "It wasn't a goal that was made up. It wasn't as if somebody tripped in the box and got a penalty kick.

"It was a genuine goal. I've been putting the wrong guy on the free-kicks for too long.

"He's been reliable, he's very rarely injured and he's a competitor. Just like Liverpool have Steven Gerrard and Jamie Carragher, I'd put Tony Hibbert in the same situation for us here at Everton."

"It was a good night all round and it was topped off with Hibbo scoring," said the former Rangers man. "For me personally, it was an ideal start and I was glad to show what I could bring to the team."

Everton start the Premier League season on Monday, 20 August, with a home game against Manchester United.