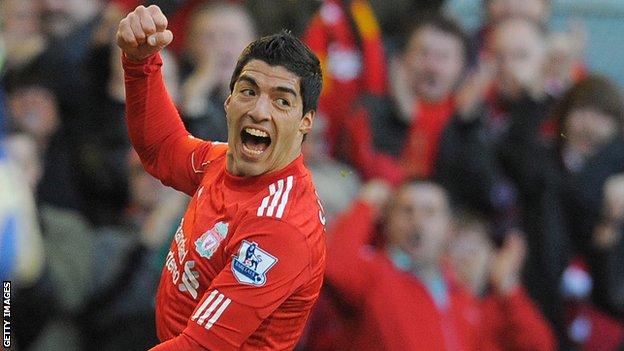 Luis Suarez has agreed a new long-term contract with Liverpool.

The 25-year-old Uruguayan had four years left on the five-and-a-half-year deal he signed when he moved from Ajax in January 2011.

But the Anfield side were keen to tie up the striker's future with other clubs showing interest in him.

Manager Brendan Rodgers said: "There were certainly a few clubs interested in him but he's committed himself for the long term here now."

He added: "I'm delighted. When you have the opportunity to work with world-class players it's fantastic."

Suarez has trebled his wages to become one of the club's highest paid players on £100,000 per week.

He told Liverpoolfc.com: "To sign a new contract with Liverpool is unbelievable for me because I am so happy here at both the club and also in the city.

"That is important for me and I am very happy with my new contract.

"When you are a kid, everybody wants to play for Liverpool. I am here now and it is a dream for me, and now I am a Liverpool fan."

Suarez only returned to the club on Tuesday following Olympic football duty with Uruguay. He trained with his team-mates for the first time since Rodgers was appointed manager.

Contract negotiations have been ongoing for some time with both the player and the club determined to secure his future at Anfield.

Suarez joined Liverpool in January of last year, but, despite scoring 21 goals in 52 games, has endured a tough time during his spell in England.

He was found guilty of racially abusing Manchester United defender Patrice Evra, banned for eight games and then widely criticised for his decision to refuse Evra's handshake when the two came face-to-face at Old Trafford.

The player is regularly on the receiving end of abuse from opposition fans and he was booed when he appeared for Uruguay at Old Trafford during the Olympic football tournament.