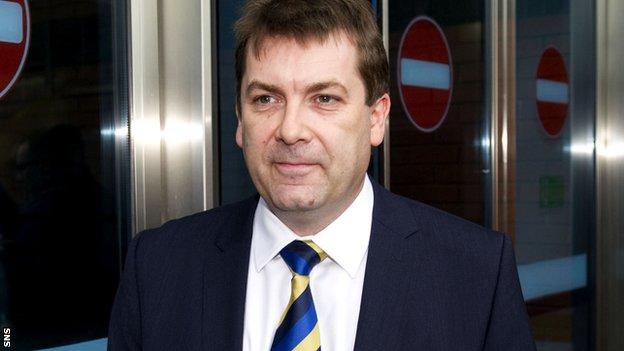 Rangers' Third Division campaign gets underway against Peterhead on Saturday and Longmuir thinks it will provide a much-needed boost to the game.

"It'll be a great showcase for Scottish talent," said Longmuir.

"It's about the interest and awareness of Rangers in the Third Division, what it brings to the league."

Following the financial collapse of the old company, Rangers newco failed to gain support to transfer the club's share in the Scottish Premier League in July and subsequently applied to join the SFL.

The 30 SFL member clubs rejected an application for the club to play in the First Division, but invited them to play in the Third Division - and Longmuir believes that the involvement of a club of the size of Rangers will improve the league's standing.

"I'm really excited about the prospects for all 30 clubs this year," said Longmuir. "I think it's a great testament to the fact that that the SFL has so many talented Scottish managers cutting their teeth in the lowest regions of the game.

"Some of them have more than 50 Scottish caps. They're experienced Scottish managers, starting off on the shop floor and building up their experience managing clubs in the SFL.

"There are also young guys out there playing Third Division football who are going to get the opportunity to play in front of a large TV audience for the first time in their career. They're going to be playing in front of full houses at their own stadiums and get a chance to play in one of Europe's five-star stadiums.

"That must motivate young Scottish boys who are working their way up the ladder.

"If I was fortunate enough to be playing football at that level, I would be thrilled and inspired at the prospect of showing my talent to a much bigger audience."

Longmuir also broached the thorny issue of league reconstruction and insisted that the introduction of Rangers to the Third Division was not a sweetner for clubs to usher in change, but discussions would continue with a view to improving all of Scottish football.

"I see no immediate way that we're going to change it," said Longmuir.

"We have been discussing league reconstruction for about two years, so I don't see any difference now from where we were three or four months ago.

"The Scottish Football League clubs and the board realise that the two issues should not be mixed - there was a sporting fairness issue, which we addressed, and there's now a financial issue which we'll address.

"The financial issue can be addressed in terms of a better flow of income throughout the game, which I'm keen to pursue.

"I'm also keen to pursue play-offs between the First Division and the SPL, something we've always valued as being good for the game - it generates excitement and commercially has great advantages.

"So, we'll continue to address and move forward with these principles that we've all agreed on and there's still a mood within the SFL to take the game forward in the right way."