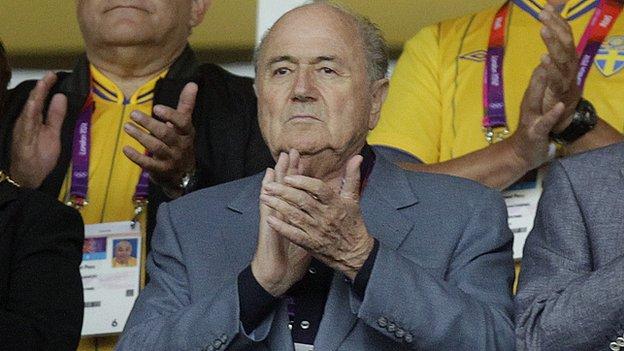 Fifa president Sepp Blatter has warned that an African team is unlikely to win a World Cup if the continent does not place more faith in its coaches.

"A coach must have a feeling for the heart and soul of his players - look at Nigeria for instance," he said.

"The players may be in Europe but the coach must understand, deeply, the mentality of the players. How can someone from outside do this?"

While no African team made it past the quarter-final stage at the London Olympics, Blatter, speaking at the Games, believes the continent's sides at that level are more competitive than at senior level.

He said: "I have been analysing African football for quite a while now, more than the football from other continents… When they play at the U-23 level, African teams can match their opponents from other parts of the world.

"You may say that Europe do not pay the same level of attention to the Olympics. But no, I can tell you that Europe is not happy with their performance at this Olympic tournament.

"At the senior level, [African national associations] just do not prepare their teams properly.

"Look at how teams from other parts of the world prepare, the money spent and the effort that is applied in getting ready to compete. African associations sometimes hire coaches just months before a World Cup. This has to stop."

Of the six national sides that represented Africa at the 2010 World Cup finals in South Africa, only Algeria had a local coach - Rabah Saadane.

Meanwhile, Blatter insists that his current four-year term, which will see him spend 17 years as Fifa president, will be his last.

"I hope I can deliver Fifa to somebody who will have the qualities and aptitude to lead, to not forget what Fifa is - it is about the game for everybody, the world game.

"Fifa is not only for those who think that they are dominating football, the powerful countries and the big clubs."