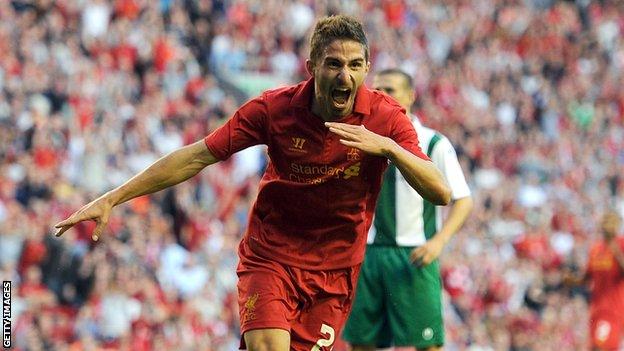 Goals from Fabio Borini - on his home debut - Steven Gerrard and Glen Johnson took Liverpool into the final qualifying play-off round of the Europa League 4-0 on aggregate.

He is expected to complete a £15m move to Anfield in the next 24 hours.

Even accounting for the poverty of football coming the other way, this was the kind of display that Rodgers must have hoped his players would produce. The Reds were inspired by Lucas Leiva's midfield generalship and the fluidity of movement found by Borini, Gerrard and the tireless Luis Suárez.

The 25-year-old Uruguyan delivered a command performance 24 hours after signing a new long-term contract, shredding the Gomel defence time and again with a virtuoso display.

Liverpool will not have the luxury of playing FC Gomel every week, of course, but the building blocks of Rodgers' philosophy were there for all to see. On paper this was the ideal settler for Rodgers: unheralded opponents, a full house and the luxury of picking from arguably his strongest side. The 39-year-old paused for a moment to soak up the ovation when he stepped out on to the pitch.

Some 20 minutes later Anfield would rise again, this time to celebrate another new arrival as Borini put Liverpool in front.

Sharper to the ball, swifter to use it, Liverpool settled quickly to produce some flowing attacking moves.

Suarez and Gerrard were at the heart of everything good about Liverpool, combining after 15 minutes, only for the Uruguayan to fire over from the edge of the penalty area. Soon Suarez and Borini were tuning into the same wavelength.

Gomel failed to clear an attempted cross. Suarez jinked along the byline after another surging burst down the left flank, his attempted cross deflected into the path of Borini who thumped an unerring low volley under goalkeeper Vladimir Bushma to score his first Liverpool goal on his home debut.

Pepe Reina may have been reduced to the role of a bystander for much of the night, but twice in five minutes during the first half the Liverpool keeper was forced into action, first turning Sergei Kozeka's shot away before almost allowing Igor Voronkov's shot to slip through his fingers.

Liverpool were in no mood to allow their lead to slip, however, and Suarez continually tormented the Gomel defenders.

Another mazy run took him beyond the Gomel defence, but as the six-yard box approached he cut the ball across goal to give Gerrard the most straightforward of finishes for his 150th Liverpool goal.

Liverpool continued to dominate in the second half. Gerrard thumped a low shot against the left-hand upright, Suarez was denied by a brilliant low save by Bushma as the Reds poured forward.

For all their bravery, Gomel simply had no answer as they resorted to simply clearing their lines when the chance presented itself.

Martin Skrtel and Daniel Agger, sporting a new You'll Never Walk Alone tattoo on his knuckles, had little to do but bask in the adulation of the Kop, which did its all to show the club it would not tolerate the sale of the Denmark defender.

Liverpool added a third when Johnson controlled a bouncing ball before thundering a swerving left-foot volley into the corner of the net from 25 yards.

Jamie Carragher, making his 701st appearance, came on for the final 20 minutes but by then the game was won.