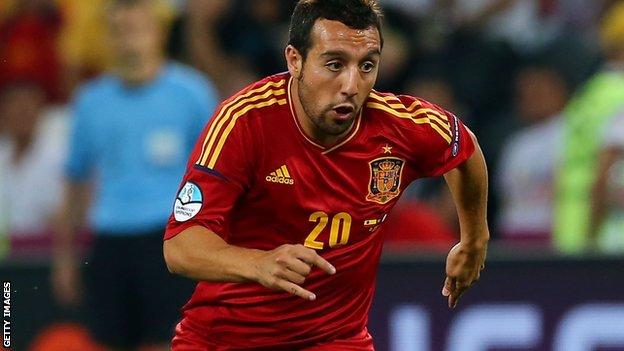 Arsenal have signed Spanish midfielder Santi Cazorla from Malaga on a long-term contract for an undisclosed fee believed to be below £15m.

The 27-year-old has joined the club at a pre-season training camp in Germany.

Cazorla said: "I'm so excited to be joining one of the greatest teams in Europe and also in the Premier League."

Boss Arsene Wenger, who is also working to sign Real Madrid's Nuri Sahin on loan, added: "He's a great signing who will add significant quality to us."

The Frenchman continued: "He is a player with good experience at both club and international level.

"He is a versatile, attacking midfield player who can play comfortably on either side of the pitch or centrally. He has good pace, is technically gifted and will be a huge asset to Arsenal Football Club. We are delighted that he is joining us."

Cazorla spoke of his intention to help the Gunners end their trophy drought, which dates back to 2005.

"I'm so happy to be joining Arsenal," he stated. "This is a club with great players, a fantastic stadium and huge support.

"The club has one of the best managers in football and their style of play is recognised and admired all over the world.

"I will do my best to help Arsenal challenge for trophies and make all the supporters happy."

Meanwhile the Gunners hope to add Turkey international Sahin to a squad already boosted by the arrivals of Germany forward Lukas Podolski and France striker Olivier Giroud from Montpellier.

Real Madrid signed Sahin from Borussia Dortmund on a six-year contract in May 2011, but the 23-year-old has struggled to establish himself at the Bernabeu and Real boss Jose Mourinho would let him leave on loan.

Doubts remain over the future of captain Robin van Persie, who has said he will not extend his contract when it expires in 2013.

But the Dutch striker is with the squad in Germany ahead of Sunday's friendly against Cologne, which was agreed as part of the Podolski transfer.

The Cazorla and Sahin deals are unrelated to Van Persie, but were accelerated by news that Jack Wilshere will not play before October as he continues his recovery from an ankle injury.

Cazorla, who joined Malaga from Villarreal last summer, stands at 5ft 6ins and featured for Spain at the 2008 and 2012 European Championships.