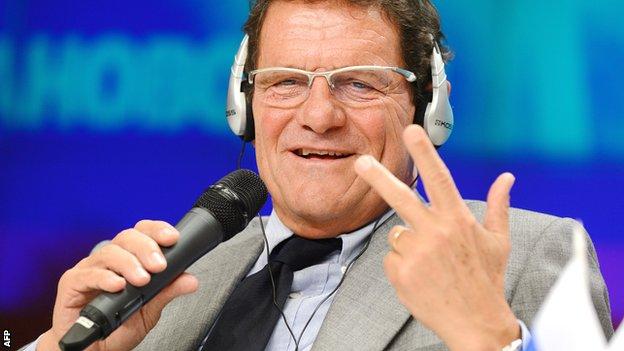 Former England coach Fabio Capello says the team would have gone further at Euro 2012 had he still been in charge.

Capello, whose England team lost in the second round at the 2010 World Cup, resigned in February after the FA removed John Terry as captain.

Roy Hodgson's England reached the Euro 2012 quarter-finals and Capello, now coach of Russia, said: "If I were with your guys it would've been even better.

"I'd worked there for four years and after what happened I wanted to stop."

Terry lost the England captaincy while awaiting trial on allegations he racially abused QPR defender Anton Ferdinand, which he was cleared of earlier this month.

"We had qualified for the finals and it was only the John Terry story that meant I couldn't go to the finals," said 66-year-old Capello, who presided over 42 matches as England boss, winning 28, losing six and drawing eight.

"On that issue with the English (FA), with my contract, it was put down on paper that the decision as to who would be captain should be made only by the coach. It was down on paper, in the contract, in black and white.

"Every national coach works for two years towards a goal - that is the ambition of every coach - but I was not given the opportunity to fight for the Euros with England.

"When you are told this is the goal... if you are always interfered with, you don't feel well. You feel ill at ease. I wanted to be the main guy with the national team again and to take a team to Brazil. I wanted that again."