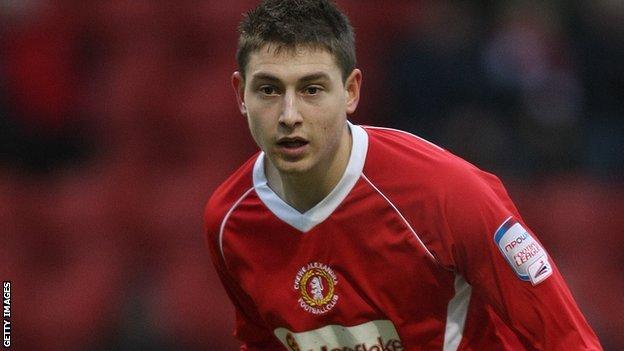 Sheffield United have signed Crewe striker Shaun Miller for an undisclosed fee, along with defenders Tony McMahon and Matt Hill who were free agents.

Miller, 24, scored six goals in 36 appearances last season but failed to find the back of the net in his final 27 games.

McMahon, 26, played 39 games for Middlesbrough last season but was allowed to leave on a free transfer.

All three have agreed two-year deals with the League One club, with Miller having the option of a third.

Sheffield United boss Danny Wilson told BBC Radio Sheffield: "We watched Shaun quite a bit last season and his potential was there for all to see. We feel that he's one for the future.

"Tony's experienced but he's still quite young. He can play at right-back or centre-back so that was in our minds as well.

"The extra cover that Matt and Tony have given us means we're not in the market for anymore defenders."

The arrival of the trio brings the Blades summer additions to five after Walsall full-back Daryl Westlake agreed a three-year deal and Manchester United striker John Cofie joined on a season-long loan.