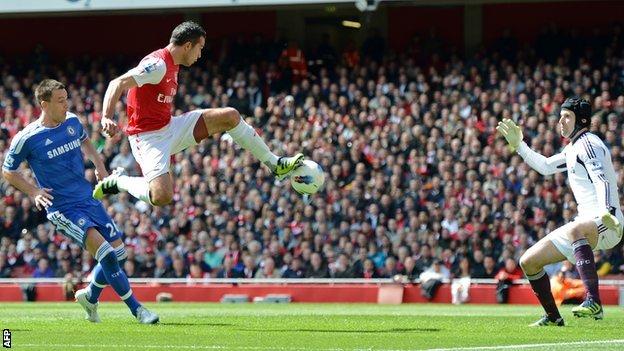 Arsenal have dismissed Manchester United's bid for Robin van Persie, with offers from Manchester City and Juventus also short of their valuation.

It is understood Arsenal are reluctant to enter formal negotiations until a bid exceeds £20m and they are hopeful of holding out for £25-30m.

Van Persie, 28, will not be part of the Gunners squad that leaves on Saturday for a pre-season tour to Asia.

Manager Sir Alex Ferguson has confirmed United have made an offer.

"Obviously Arsenal have given out the fact that we've made a bid for him," Ferguson told MUTV.

"We try to keep business as close as possible to us until the moment we conclude a deal. There's no point talking about something that might not happen.

"There are other clubs interested in the player. We've shown an interest and that's where we're at at the moment."

The striker, whose contract ends in 2013, says he will not sign a new deal.

Van Persie scored 41 goals in 53 games for club and country last season and was named Professional Footballers' Association and Football Writers' player of the year.

However, he suffered a disappointing Euro 2012 campaign, scoring only once as the Netherlands were eliminated at the group stage.

After meeting with manager Arsene Wenger and chief executive Ivan Gazidis in mid-May, captain Van Persie revealed he had disagreed with both men on the way the Premier League club should move forward.

"I've thought long and hard about it, but I have decided not to extend my contract," he wrote on his website.

"This was a meeting about the club's future strategy and their policy. Financial terms or a contract have not been discussed, since that is not my priority at all.

"I personally have had a great season but my goal has been to win trophies with the team and to bring the club back to its glory days.

"Out of my huge respect for Mr Wenger, the players and the fans I don't want to go into any details, but unfortunately in this meeting it has again become clear to me that we in many aspects disagree on the way Arsenal FC should move forward."

Arsenal are scheduled to play matches in Malaysia, China and Hong Kong over the next two weeks.

They face a Malaysian XI on Tuesday in Kuala Lumpur, then head to Beijing to face Manchester City on 27 July. The Gunners finish their tour against Kitchee FC in Hong Kong on 29 July.

Van Persie will remain in England while his team-mates are away on tour, working on his fitness at Arsenal's London Colney training base.