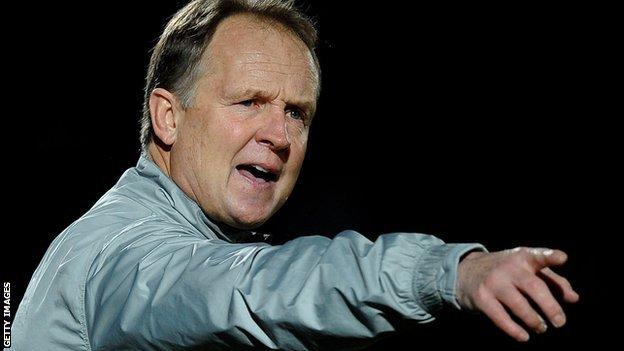 Nottingham Forest have appointed Sean O'Driscoll as their new manager, two months after he took over at Crawley.

O'Driscoll spent five months as first-team coach at Forest last season under former boss Steve Cotterill before taking charge of Crawley in May.

The club's new owners, the Al-Hasawi family, have told the BBC that O'Driscoll has a three-year deal.

Sean O'Driscoll deserves his chance of a prestigious club, not least because of his body of work at Doncaster where he espoused the passing game that Brian Clough indoctrinated at the City Ground. But O'Driscoll is going into an uncertain set-up at Forest. Frank Clark, the link as chairman with the Forest fans, is earmarked for an ambassadorial role which is a waste of his contacts and experience.

Forest's new owners said they were eager to appoint an "iconic manager" to replace Cotterill, who they dismissed last week.

Sven-Goran Eriksson was among a number of managers who was believed to have been interested in the role while fellow former England manager Glenn Hoddle had initial talks with Forest's new owners.

Al-Hasawi added: "Sean's passion for Nottingham Forest, knowledge of the game and the Championship in particular, plus his work ethic, shone through in our conversations.

"He is hugely respected, not only by members of our current squad and staff at the club for his work in helping transform our fortunes last season, but also within the wider football community."

O'Driscoll, who began his managerial career with Bournemouth in 2000, earned his reputation with Doncaster Rovers who he led to promotion to the Championship in 2008.

The former Republic of Ireland international was dismissed from his post at the Keepmoat Stadium in September 2011 before taking up his duties as first-team coach at the City Ground in January 2012.

O'Driscoll, 55, left for Crawley in May but has now returned to Forest without having taken charge of a competitive game.

He said: "It was an easy decision to make to return to Nottingham Forest.

"I enjoyed my time working with the players last season, and even in sometimes difficult circumstances the fans gave the kind of support you don't often see in football today.

"The Al-Hasawi family's ownership opens exciting prospects for this club and I look forward to rebuilding the squad and playing the kind of attractive football the City Ground deserves to see."

Crawley chief executive Alan Williams was reluctant to see O'Driscoll leave so early into his tenure at the Broadfield Stadium, but was willing to let the manger move on.

"The club is extremely disappointed to be losing Sean so soon after he came to Crawley Town, but our policy has never been to stand in the way of any employee who feels they would prefer to pursue a role at a different club," he said.

"We would like to thank Sean for his efforts during his time at the club and we wish him all the best for the future."

Crawley director of football Steve Coppell and head coach Craig Brewster will take over first-team affairs on a temporary basis.