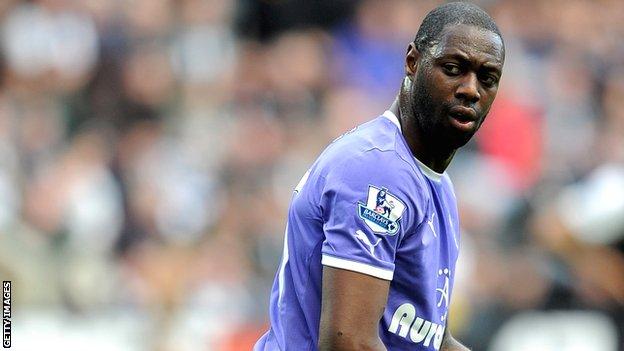 Tottenham defender Ledley King has retired from professional football but will remain at Spurs in an ambassadorial role.

The former England international, 31, has struggled with injuries for a number of years and has been unable to train on a daily basis.

"Sadly my injuries and inability to train have finally brought an end to my career," King told Tottenham's website.

"I'm pleased that I can continue to work within the club."

It all started: 1 May 1999 v Liverpool when, as an 18-year-old, he replaced Stephen Clemence at half time.

Career highs: Lifting the Carling Cup in 2008, making his senior England debut against Italy in 2002, scoring for his country against Portugal in 2004 and Mexico in 2010.

Spurs have announced that a testimonial will take place at the end of the 2012-13 season for King, who spent his entire playing career with the London club after joining as a trainee.

After his debut in 1999, King went on to make 264 league appearances, winning the Carling Cup in 2008, and was club captain.

The centre-back also represented England 21 times and was in the 2010 World Cup squad.

His last appearance for his country came against the United States in South Africa two years ago.

"I have been here since I was a boy," added King, whose career was blighted by knee problems. "It is like a second home to me.

"I have always considered it my club and have always found it hard to imagine wearing the shirt of another team.

"I would like to say thank you to everyone at the club and to the fans.

"I have missed a lot of football over the years, but the Spurs fans have always been patient and incredibly supportive with me during difficult periods."

They said what about Ledley?

"I see Ledley King has announced his retirement from football. A truly wonderful player and credit to his sport. Wish him well. ‪#spurslegend." BBC Sport's former Tottenham striker Gary Lineker.

"Sorry to see Ledley King retiring from football, top player. Hope he passes on some of his football skills/knowledge to the next generation." Manchester United and England defender Rio Ferdinand.

On his new ambassadorial role, King said: "I am pleased that I can continue to work within the club and for the local community, especially after the devastation caused by the riots last year.

"I am already heavily involved with the work of Spurs Foundation and the new stadium scheme will be a major factor in the regeneration of the area, so I am delighted that I shall be part of that."

Tottenham chairman Daniel Levy described King as "one of the most gifted players in the history of the club".

"It has been well documented how he has battled against injury over the years," said Levy.

"It is testament to the character of the man how he managed to sustain such high standards of performance on the pitch, while providing such fine leadership."

King's final Premier League appearance for Tottenham was a 1-0 defeat at QPR on 21 April.