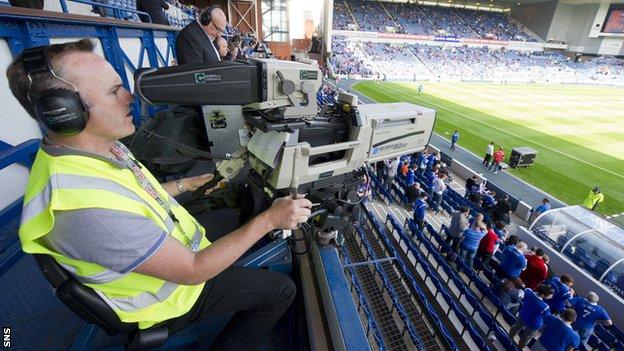 The Scottish Football League has approached broadcasters with a package to show up to 25 live Rangers matches in Division Three next season.

However, any deal cannot be finalised until the Scottish FA grants membership to the new club.

The SFL's media representative IMG, is inviting bids from interested parties, with a closing date of Monday.

The proposed deal includes the opportunity to broadcast all 18 of Rangers' away league matches.

Members of the Rangers board held talks with the SFA on Tuesday, but there is debate over what punishments they will accept in return for membership.

It is understood the SFA wants the newco club to accept the 12-month transfer embargo handed out to the old company for bringing the game into disrepute.

The governing body also wants guarantees from Charles Green's consortium that all football debts will be cleared.

The SFL TV deal on offer is subject to certain criteria, including fixture clashes, scheduling clashes and policing but with the start of the new season less than three weeks away, they want all parties to move quickly.

And BBC Scotland has learned that several parties have already declared an interest.

As the SFL looks for a broadcast partner, its counterpart at the Scottish Premier League continues negotiations over its own television and radio deals.

SPL chief executive Neil Doncaster has spent the last 48 hours in talks with Sky and ESPN discussing what they are willing to pay for a top league without Rangers.