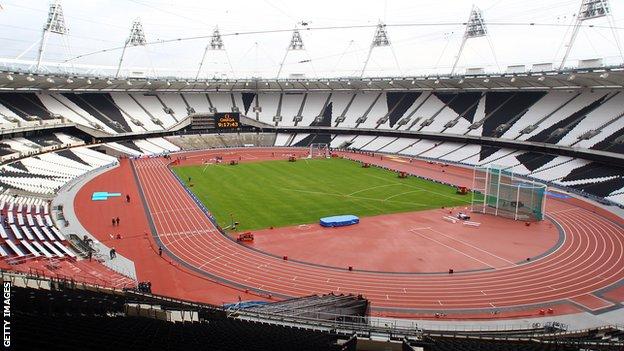 The League One club are one of four organisations bidding to use the venue after the 2012 Games.

He told BBC London 94.9: "I don't see anything wrong with West Ham and Orient sharing fixtures there.

I had a Martin Luther King moment - I had a dream. I looked at the Olympic Stadium and said 'why not' [share with West Ham]?

"On the one hand, a Premier League giant with all their money and on the other a community club with dreams. I think the more the merrier."

The bids for use of the stadium were announced on Tuesday, with Orient facing competition from West Ham, Intelligent Transport Services in association with Formula One, and UCFB College of Football Business.

The London Legacy Development Corporation (LLDC) is due to assess all the bids before any negotiations begin.

Hearn has called for the stadium to be utilised as much as possible.

"Personally, as an event person who does hundreds of events all over the world every year, I do know that venues have got to be used," he continued.

"I think [Orient being tenants on their own] would be a waste.

"You've got this amazing stadium and it needs to be utilised. You need to have a plan.

"This is a big building that has a lot of public money locked into it, and you need to be able to use the facility.

"There's a long way to go before the decision is made. It has to create a legacy that benefits everyone, not a chosen few."

Last month West Ham indicated that they were opposed to sharing the stadium.

"I don't need to have a conversation with West Ham, because I'm applying for tenancy," Hearn continued.

"It's up to the Olympic people to decide which tenants they are going to accept.

"It doesn't matter if West Ham are for it or against it, because it's not their decision."

But Hearn believes that despite an average league attendance of just under 4,300 at Brisbane Road in 2011-12, their bid to move to the east London venue is both feasible and realistic.

"A lot of people said, 'what are we doing moving?'"

"I had a Martin Luther King moment. I had a dream.

"We are a community club and we tick a lot of boxes. We are debt-free and have a sensible business plan.

"I looked at the Olympic Stadium and said 'why not?'.

"If our dream is shared by those people that are in charge of the Olympic facilities, who's to say what can be achieved?

"Is it about money legacy, or the real ethos of the Olympic Games, which is the community aspect?

"We think we could create an innovative and creative way forward and maybe do something quite remarkable."