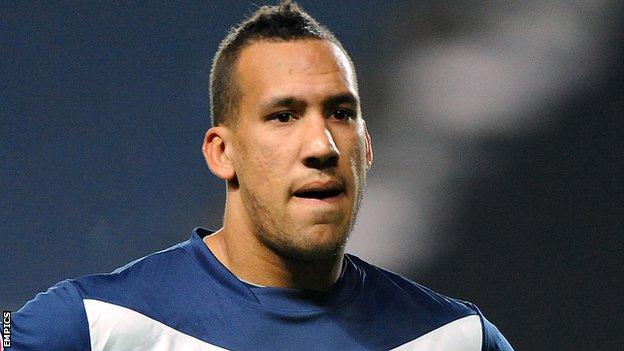 Port Vale manager Micky Adams is hoping to agree a deal with striker Liam Dickinson as completes his rehabilitation with the club.

The 26-year-old left Southend at the end of last season after suffering a serious ankle injury in March.

"He's not fit enough to join in with the rest of the group, but that will happen," Adams told BBC Radio Stoke.

"If we do happen to sign him we're not bringing in an entirely new body into the club, it's somebody we know."

The former Stockport, Brighton and Barnsley forward joined the Shirmpers from Plymouth and scored 12 goals in his 36 appearances at Roots Hall.

But Adams is conscious of not including Dickinson too early as the surgery he underwent in March including having metal plates inserted into his foot.

"The important thing is we don't rush him," he added. "It was a serious injury that he had and he's got to make sure that his rehab is done safely and in a correct way.

"The good thing about it is he's getting to know the players as he goes along as well.

"At this level he's quite a threat so the important thing is getting himself right at the moment and we'll progress that further."

After being under a transfer embargo since going into administration in March, Vale's recent takeover by Keith Ryder has allowed manager Micky Adams to make six signings.

But the former Leicester, Brighton and Sheffield United manager believes Vale still need to add to the squad as they prepare for another year in League Two.

"We did lose out on a couple of people who chose not to join but the boys we've taken on have fitted in very, very well," Adams stated.

"We still think we're a couple of bodies short in certain areas and we're working on that as we speak, so come the start of the season I would hope there is another couple there to get excited about."