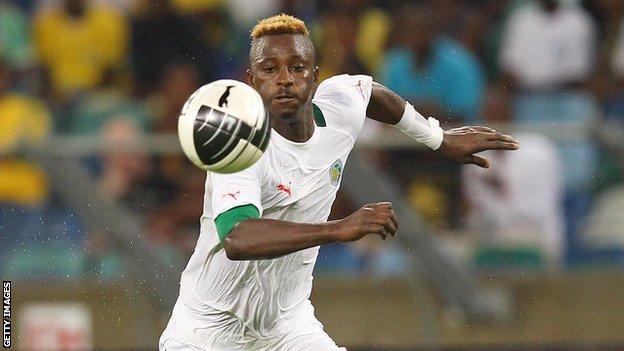 Danish club Copenhagen have refused to release striker Dame Ndoye to play for Senegal at the Olympics.

Ndoye was named as one of three over-age players to join Senegal's under-23 squad for the Games.

Under Fifa regulations clubs have to give permission for over-age players to play at the Olympics.

Yero was one of four standby players named in Senegal's original squad for the Olympics.

Senegal continue their preparations for the games with a friendly on Tuesday against Switzerland, who have also qualified for the Olympics.

The Senegalese side will be full of confidence going into the game after a 2-0 win over Spain on Friday with goals from Ibrahima Seck and Sadio Mane.

It means Senegal have just two of the three permitted over-age players in their squad - West Ham United midfielder Mohamed Diame, 25, and Papa Gueye, 28, of Metallist Kharkiv in Ukraine.

Senegal open their Olympic campaign against hosts Great Britain in Manchester on 26 July, before moving to London to face Uruguay at Wembley three days later.

The first-time qualifiers conclude their Group A campaign when taking on United Arab Emirates in Coventry on 1 August.

Gabon had a similar problem when French club Lorient refused to release defender Bruno Ecuele Manga for the Games.