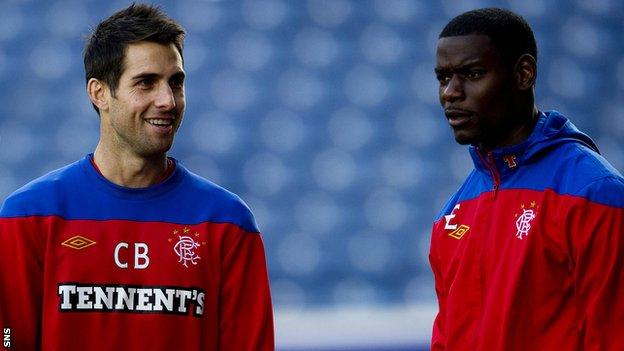 And Green has addressed non-playing staff about the prospect of widespread redundancies at Ibrox as a result of the club playing in Division Three.

"Goian has been very loyal, willing to stay in Division One, as have Edu and Bocanegra," said Green.

"But you can't expect international players to play in Division Three."

Green revealed he had already spoken to Goian's agent, who told him that the Romania defender had received several offers.

There will be jobs going - the implications are huge

And, like Goian, USA duo Bocanegra and Edu have been absent from the club's training ground, having been granted an extended summer break.

"We're going to lose some more now for different reasons than the others," added Green. "But we can understand and we thank these players for their loyalty."

With the old Rangers heading for liquidation, the Scottish Premier League clubs rejected an application for membership from the consortium led by Green that bought the club's assets.

And Scottish Football League clubs on Friday voted in favour of admitting the new club to Division Three instead of Division One.

If Scottish FA membership can be negotiated, Rangers are due to be re-launched in the Ramsden's Cup first round against Brechin at Glebe Park on 28 July.

While the playing staff has already been reduced drastically, it would seem that there will have to be further cuts.

"There will be jobs going - the implications are huge," explained Green.

Large scale redundancies were avoided when the Ibrox club went into administration in February, largely due to top players agreeing to 75% salary reductions.

International clearance for the transfers of Davis, Lafferty, Ness, Whittaker and Naismith has been put on hold as Green continues to dispute the players' status.

Naismith has moved to Everton, Whittaker has signed for Norwich and Ness has joined Stoke.

Northern Ireland duo Davis and Lafferty are at Southampton and Swiss side Sion respectively, while goalkeeper Allan McGregor has had talks with Turkish club Besiktas.