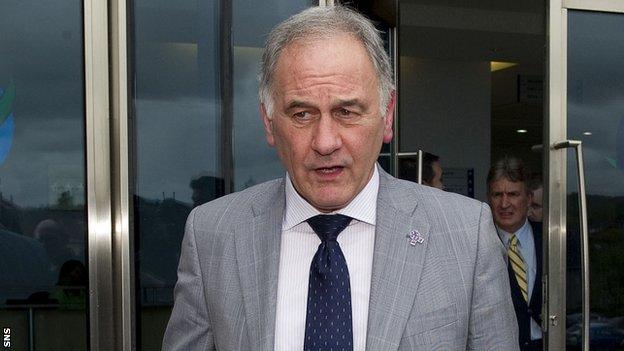 Charles Green's consortium is looking to persuade the SFA to shelve a transfer ban imposed on the old Rangers before it headed for liquidation.

But they are being asked to provide more details on the identity and propriety of investors and directors.

The new Rangers need the membership so they can start life in Division Three.

Scottish football's governing body received an information pack from Sevco on 29 June, seven days after the company submitted a letter of application to take the place of Rangers after buying the stricken club's assets for £5.5m.

But the SFA is still looking for answers and

Chief executive Green set off for meetings with Uefa in a bid to ease the burden of demands from European football's governing body to repay about £3m of football debts.

As he did so, three members of Sevco - chairman Malcolm Murray, Imran Ahmed and Brian Stockbridge - met SFA officials at Hampden.

Green and the SFA had warned that the new Rangers' participation in the Scottish Football League was not yet a certainty.

"Without SFA membership, we can't play in the Third Division," said the Sevco chief.

"They want to put some transfer embargo on us, but we can't have that as we don't have any players."

Carlos Bocanegra, Maurice Edu and Dorin Goian are poised to leave Rangers with the blessing of Green, following the exits of several other first team players who refused to transfer their contracts to his company.

Scottish Football League clubs voted the newco Rangers into Division Three on Friday, rejecting a proposal by the SFA and Scottish Premier League to place them in the First Division.

The SPL, which previously rejected the newco application to replace the old Rangers, has now invited Dundee into the top flight and vowed to help smooth Rangers' path into the lowest tier.

However, the SFA must first address the issue of a prior transfer ban and £100,000 fine imposed on the previous regime for "bringing the game into disrepute".

"There's still a number of issues outstanding between Rangers and the SFA and we're working on them now," explained Green, who had been willing to shoulder the old club's footballing responsibilities when bargaining for SPL, then Division One, entry.

"The problem is that we have been discussing them for some time.

"It is a balance between what is fair and what's appropriate.

"We wish Dundee every success and we are now looking forward to reaching an agreement with the SFA so that we can get on and start playing in the Third Division."

Rangers are unable to play even pre-season friendly games without SFA membership.

However, the SFA has vowed to resolve the outstanding issues with Rangers ahead of their opening fixture, away to Brechin City in the Ramsdens Cup on 28 July.

"The new season begins in less than two weeks and it is incumbent on the Scottish FA to conclude all outstanding issues relating to Rangers FC.

"To that end, we aim to meet with the club this week with the intention of achieving a satisfactory outcome for all parties so that we can focus on football in time for the new campaign."

Meanwhile, SPL chief executive Neil Doncaster has said there is still the possibility of sanctions being levied as a result of the old Rangers' administration's behaviour in the transfer market.

Doncaster told BBC Scotland the SPL will now look at the Employee Benefits Trust scheme operated by the Rangers oldco and the possibility that players were improperly registered.