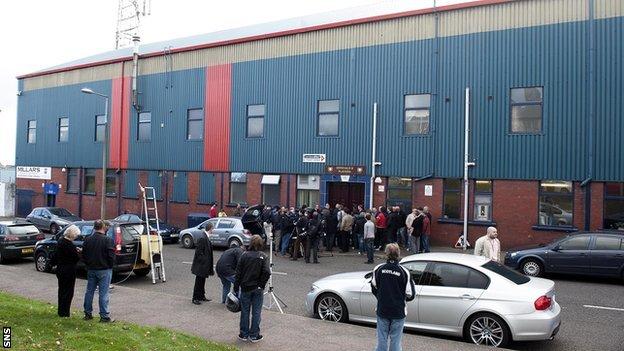 Dundee have been invited to replace Rangers in the Scottish Premier League.

The decision was taken at the SPL's annual meeting, which means Dunfermline Athletic's hopes of a reprieve from relegation have been dashed.

SPL clubs also agreed that it would "work with the Scottish FA, SFL and Rangers to facilitate Rangers FC taking their place in SFL Division Three".

The SPL fixtures had left space for a "Club 12" after the old Rangers headed for liquidation.

We were always confident that, on sporting merit, it would be us

SPL chief executive Neil Doncaster said the decision had been taken "purely on sporting integrity" and that Dundee were the "overwhelming" choice of the other clubs.

Dundee, who were runners-up in Division One and finished 24 points behind champions Ross County, will accept the invitation to play in the SPL.

Dens Park chief executive Scot Gardiner said: "We were always confident that, on sporting merit, it would be us, but we have been in limbo for a few weeks and, only now, can we start to plan properly for the SPL.

"We have a very good squad of players and can now add to that squad."

With Dunfermline unlikely to challenge the decision, Dundee, who were themselves in administration two years ago, will now start the SPL season away to Kilmarnock on 4 August.

The new Rangers are expected to start their new life by taking the Dens Park side's place in the first round of the Ramsdens' Cup.

Charles Green's Sevco consortium will hope the new Rangers will be accepted as SFA members this week and they are now due to travel to face Brechin City, who were expecting to face Dundee, on 28 July.

Airdrie United, who were runners-up in the end-of-season play-offs, will replace Dundee in the First Division, with Stranraer moving up a division to take Airdrie's place.

Some Scottish Football League clubs had feared that the SPL clubs would reverse their previous decision to reject the application from Sevco to field their new Rangers in the top flight.

SPL chief executive Neil Doncaster and SFA counterpart Stewart Regan had both warned about the potential loss of significant commercial contracts should Rangers be placed in Division Three, with a minimum of three seasons outside the top flight.

However, the chairmen of Dundee United, St Mirren, Inverness Caledonian Thistle, Aberdeen and Hearts had all said before the agm that they would not be revisiting the vote, when 10 of the 12 SPL clubs were against Sevco's application.

Clyde, Queen of the South and Dunfermline were among clubs who warned that top-flight clubs could attempt to created an SPL2 involving Rangers and other invited sides to ensure that the new Ibrox outfit had the chance of returning after one season.

However, SPL chief Doncaster said that SPL2 was not on the agenda of a meeting after which it was announced that Ralph Topping had been re-elected as chairman.

St Johnstone chairman Steve Brown and Motherwell vice-chairman Derek Weir have stepped down from the six-man board.

St Mirren chairman Stewart Gilmour had warned over the weekend of "catastrophic" consequences of the SFL vote but said: "It was a really good meeting, really positive. It's time to move on."

"They were there and were delighted today and I'm sure the team coming up will be delighted as well."