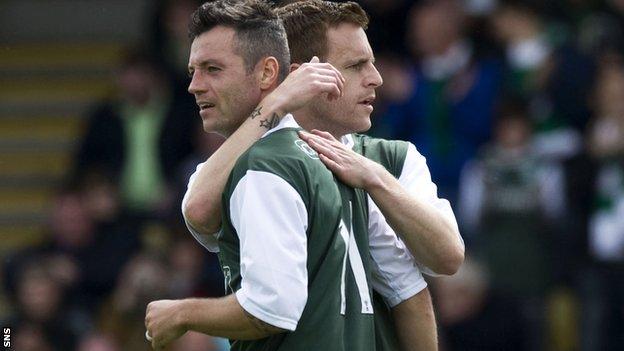 Pat Fenlon is unsure whether Hibernian can afford a deal for former Hearts full-back Alan Maybury.

The 33-year-old Irishman played the second half of Hibs' 2-0 friendly win over East Fife on Saturday as he looks for a club after leaving St Johnstone.

But no deal is imminent amid the fallout from the collapse of Rangers.

He's probably someone we could do with around the place

"Whether we are able to do it at the moment, I'm not too sure with the way things are," Hibs manager Fenlon told his club website.

Maybury, who has 10 Republic of Ireland caps, started his career with Leeds and spent four years with Hearts before spells with Leicester City and Colchester United before joining Saints in 2010

He also had loan spells with Reading, Crewe Alexandra and Aberdeen.

"We have had Alan in training for a week. He's a great professional and a very, very good player," added Fenlon.

"He's probably someone we could do with around the place.

"So we'll just have to wait and see."