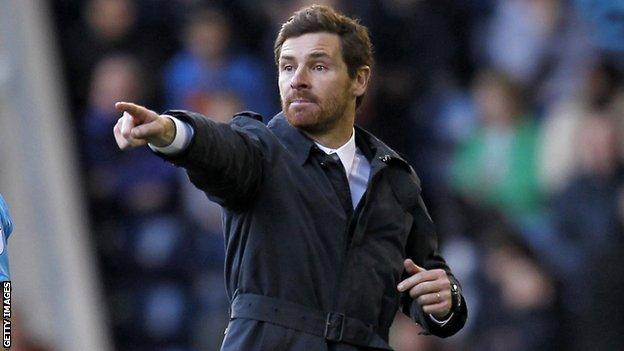 Tottenham boss Andre Villas-Boas has criticised former club Chelsea but says he is not out for revenge against them.

"Words did not meet the actions of what we were doing [at Chelsea] in terms of the project, so I think I was cut short," he said.

"This club [Tottenham] is much more important than me and what I have to do is try to take them to success and not make it a personal issue."

With Van der Vaart, at the moment I am absolutely counting on him

Chelsea owner Roman Abramovich replaced Villas-Boas with Roberto Di Matteo in March and the Blues went on to win the Champions League and FA Cup.

But Villas-Boas, 35, who took over as Spurs boss this summer following the dismissal of predecessor Harry Redknapp, pointed out differences in characteristics between Tottenham and Chelsea.

"I met the [Spurs] chairman [Daniel Levy], and saw the way he goes about his business at the club," said the Portuguese.

"He knows what he is doing, approaching the market in a different way. He is a person of great football understanding and he had the effect of giving me the assurances I wanted in terms of building something.

"Tottenham are linked with great football in the past. It is something they have always valued highly. There is a wonderful history of attractive football, and Bill Nicholson left these messages of football well played and doing things in style, which is what I want to achieve as well.

"The structures that surround Tottenham are extremely good. There are competent people in and around the football club. The club is driven towards success, and everybody knows they must play a part in achieving that success.

"They are not looking for certain scapegoats, and when so many people are striving forward, it makes your job easier."

"With Van der Vaart, at the moment I am absolutely counting on him," he said.

"It is a totally different situation from Luka [Modric], who has been chased by different clubs in the past two seasons and is continuing to drag interest.

"We have to make sure the club's interests are met and it is up to the chairman to decide that."