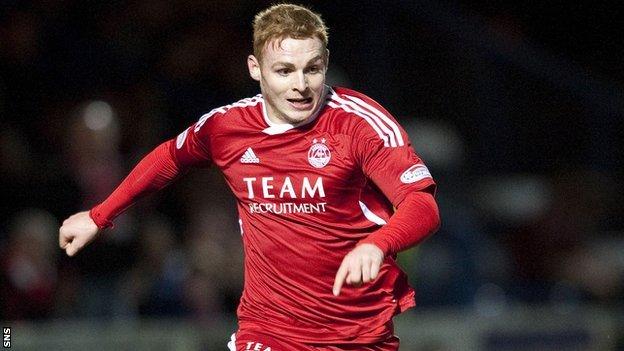 Wigan have signed young Aberdeen midfielder Fraser Fyvie on a three-year contract for an undisclosed fee.

The 19-year-old opted to move to the DW Stadium despite interest from Wigan's Premier League rivals Fulham.

Fyvie made 66 first-team appearances for Aberdeen, and Latics manager Roberto Martinez said his first signing of the summer had a "tremendous future".

He's played a lot of games in the Scottish Premier League at a high standard which shows his maturity."

Aberdeen sanctioned the sale of the former Scotland youth captain so they could receive a fee as his Pittodrie contract was due to expire in January 2013.

"Technically he's very gifted, enjoys playing in midfield where he can cover large areas," added Martinez about his latest recruit.

"He's very powerful off the ball and in possession is someone who can read the tempo of the game very well.

"Also you have to remember that for such a young player he's played a lot of games in the Scottish Premier League at a high standard which shows his maturity."

Fyvie became the youngest-ever player to start for the Dons when he made his debut against Hamilton Accies as a 16-year-old in 2008.

Aberdeen manager Craig Brown had hoped to have Scotland Under-19 international Fyvie for the first half of the season but is now resigned to finding a replacement.