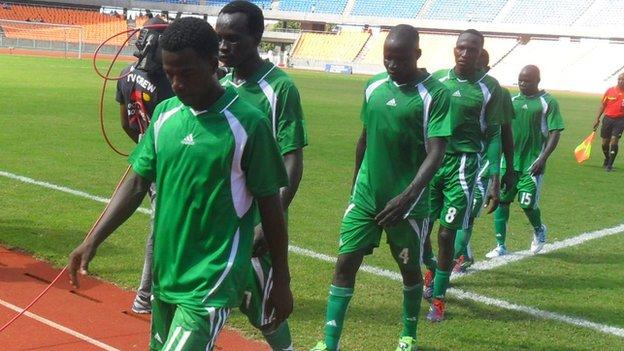 South Sudan's Al Salaam Wau were thrashed 7-0 by Rwanda's APR on Saturday in Dar es Salaam in the opening match of the East and Central African regional club championship.

The game was the first competitive fixture overseas for any club from South Sudan, a country that celebrated its first anniversary of independence on Monday.

Part of the celebrations involved South Sudan's first international, when the 'Bright Star' held visitors Uganda to a 2-2 friendly draw.

Despite the defeat Al Salaam's assistant coach Mel Yok Kuol was happy with the performance.

"It was a very good game - our players weren't in good condition as we travelled (from Wau) to Juba by car," he said.

"It is a new country, a new field for them but they managed to do well.

"The coming game they will improve, they will do something better than this."

APR's Dutch coach Ernest Brandy also felt there was more to come from the debutants.

"They have some good players in the team, but they have to play more and more to get better," he said.

The Rwandan side scored three goals in the first half through Lionel St Preus, Jean Baptist Mugireneza and veteran striker Olivier Karekezi.

St Preus added a second after the break and Seleman Ndikumana also grabbed a brace with Barnabe Mubumbyi the other man on the scoresheet.

Despite being guilty of losing the ball too easily, Al Salaam did create several good chances to score a goal in their debut game.

Their best chance was wasted by captain Khamis Leon in the 60th minute, when he beat APR keeper Jean Claude Ndoli only for his well-taken shot to bounce off the crossbar.

"We would say that it is lack of experience that we failed to take our five chances, but we hope next time we will do better," he said.

There was a shock in the Saturday's second match as defending champions Yanga of Tanzania lost 2-0 to Atletico of Burundi, whose two goals were scored by Didier Kavumbagu.