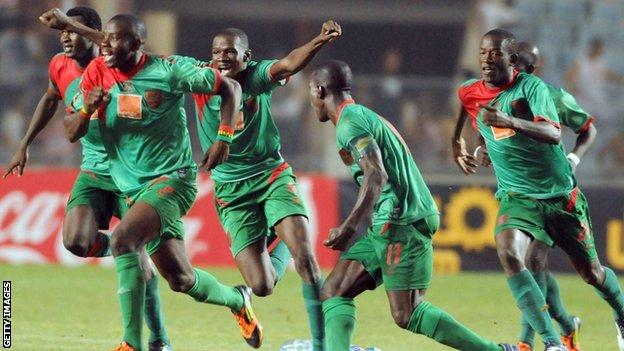 Title-holders MAS of Morocco crashed out of the Confederation Cup as they lost 2-0 in Congo to AC Leopards, who won the tie 2-1 on aggregate to reach the group stage of the competition.

MAS were reduced to seven men as Rachid Dahmani was sent off after 25 minutes and then in the 40th minute Bienvenu Kombo scored for AC Leopards.

The Angolan referee sent off defenders Omar Ennamsaoui and Said Hammouni in the final minute of regular time and another defender, Younes Lyousfi, in stoppage time.

MAS kept the Leopards at bay with seven men until Yapo Guolelida fired a penalty past goalkeeper Anas Zniti to seal a passage into the last eight for the Congolese.

It was a second major scalp for Leopards after they beat two-time winners CS Sfaxien of Tunisia in the second round.

Another Moroccan side to be knocked out was CO Meknes, who lost 4-1 on aggregate following a 1-1 draw at home with Mali's Stade Malien.

There will be a Malian derby in the group stages after Djoliba (pictured) beat former African champions Club Africain 4-3 on penalties in Tunisia.

Club Africain's Hamza Agrebi scored in the 31st minute and then Amir Haj Massoud levelled the tie on aggregate with an injury-time penalty to force the decisive spot kicks.

Wydad were held to a goalless draw by visiting AF Amadou Diallo of Ivory Coast but advance thanks to their 1-0 win in the first leg two weeks ago.

Two Sudanese sides advanced on Saturday as Al Merreikh and Al Hilal both earned aggregate victories and will now face each other in Group A.

Al Merreikh battled out a 0-0 stalemate in South Africa with Black Leopards but go through 3-2 on aggregate.

Al Hilal completed a double over CO Bamako with Sudan striker Mudathir Eltaib scoring the only goal of the game in Mali to make it 3-0 overall.

Remarkably, three Sudanese teams will contest Group A after Al Ahly Shandy won 2-0 at home against Coton Sport of Cameroon to win through 2-1 on aggregate.

Joining the Sudanese in Group A will be Angolan police outfit InterClube after they beat visiting Dynamos of Zimbabwe 1-0 on Sunday and that was the same scoreline on aggregate.

The two-group mini-league phase will be played between 3 August and 21 October, followed by the semi-finals and final with US$660,000 going to the winners.