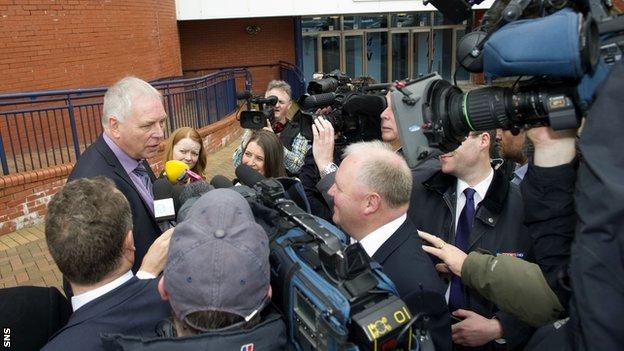 Dunfermline and Clyde fear ways will be found not to abide by any decision to vote Rangers into Division Three.

The Scottish Football League is meeting to decide whether the "newco" Rangers will play there or Division One.

But Clyde claim that the Scottish Football Association and Scottish Premier League have warned they might not act on the vote of the 30 clubs.

And John Yorkston, who is hoping the Pars will play in the SPL, said: "They still haven't ruled out Rangers."

The fans have always said they are happy to go to Three. We just want to get a decision and move on

After the old Rangers headed for liquidation, Charles Green's Sevco consortium had its application for membership of the SPL rejected by 10 of the other 11 clubs.

Now the SFA and SPL have warned that, should Rangers drop to Division Three, it could lead to a reduction in vital television contract money and financial problems for clubs throughout Scotland.

They have offered the 30 SFL clubs a working party into reorganising the league structure and other financial incentives should they vote for Rangers in Division One.

However, Yorkston told BBC Scotland: "We did have a meeting of the board, but we're still going to be voting for Rangers to go to the Third Division.

"We are trying to be fair here and there can't have rules for one and different rules for others.

"We are aware of the financial consequences to our club and other clubs, but we feel the sporting integrity is the right way to go."

Nine clubs had gone public with their opposition to Rangers in Division One ahead of the meeting, with another nine having indicated that they were so minded before the negotiations between the three governing bodies.

No matter which division Rangers are voted into, Dunfermline and Dundee are due to learn on Monday which will replace the Ibrox club in the top flight.

"Ourselves and Dundee are the two main contenders, though I wouldn't rule out the SPL doing something regarding newco if Rangers or newco are put into the Third Division," said Yorkston, who thought there would be calls for the resignation of top personnel at the SFA and SPL.

"They may actually go with Rangers. Rangers have still got the share in the league and that might be an option they go for if they believe Rangers in the Third Division is the right decision."

Clyde, who have questioned whether there is enough information about the new Rangers' finances to allow them into either division, had similar fears following alleged comments by the SPL chief executive.

"Neil Doncaster told the SFL clubs that the SPL would not allow Rangers to join the Third Division as the loss of £16m would not be countenanced," said the Division Three club's latest statement.

"He is also on record as having said that a 16-team league would cost £20m. Therefore we can hardly have confidence that the focus on finance will allow these proposals to come to life.

However, Rangers' chief executive says his new club will play in whichever division the SFL clubs decide upon.

"We've always been prepared for both," said Green.

"The fans have always said they are happy to go to Three. We just want to get a decision and move on."

However, Green fears it might not be the end of the controversy, which began when Rangers went into administration before the end of last season.

"I hope it will be, but I'm not convinced it will," he told Sky Sports News.

"It is a very important day. I think it is time now for realisation.

"I think the vilification and persecution has to end and common sense has to prevail and I think it will."