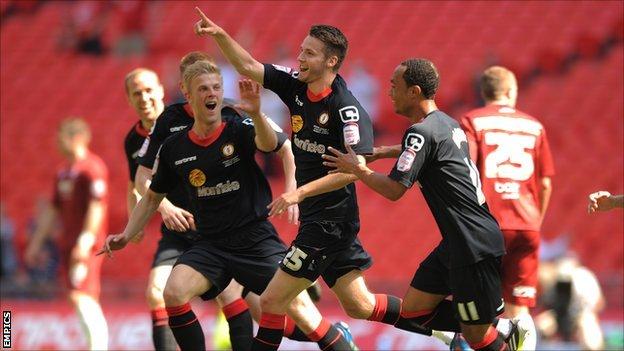 New signing Nick Powell has been lined up for a switch to a central midfield role at Manchester United following his move from Crewe Alexandra.

The 18-year-old operated as a forward last season and finished the campaign with 16 goals for the Alex.

But Sir Alex Ferguson plans to utilise Powell, who scored in Crewe's League Two play-off final win against Cheltenham, in a deeper role.

"We see him as a central midfield player," said the United boss.

"Crewe played him as a forward in behind the striker, but I asked a question of [Alex director of football] Dario Gradi as to whether he thought central midfield was his position.

"That's what he thinks, and Nick thinks that's his position too, so we're all in accord on that."

Ferguson admits that the role of former Crewe boss Gradi was crucial in smoothing through 18-year-old Powell's £3m-plus move to Old Trafford.

"The fact that I knew Dario well made it much easier in terms of getting to the point of helping us do a deal quickly," added Ferguson.

"Nick had been on our scouting radar for a while. When he first came into the team from last November onwards, he did very well and we've watched him progress.

"Then when we got to the end of the season it started to get a bit more serious and we decided to do a deal before the play-offs, which proved the right thing to do.

"He's still got a bit of physical development to do, as you'd expect of any 18-year-old, but he'll be with the first team squad and train with us every day.

"If they progress and they're good enough, I've no issue with that. We play young players all the time."

Powell is looking forward to getting started at Old Trafford.

"I thought Crewe's facilities were amazing for a League Two club but this is a different world," said Powell.