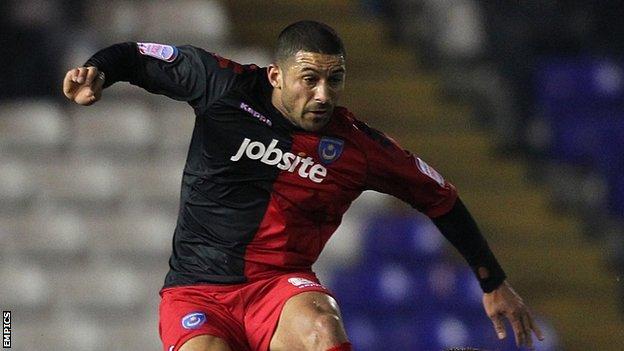 The Crystal Palace and West Ham old boy arrives at St Andrew's on a free transfer on a two-year deal.

Pompey, who loaned him to Reading in March, need to lower their wage bill.

They now have just eight senior players and manager Michael Appleton cannot afford to keep any of them.

Mullins moved to Pompey in January 2009, picking up an FA Cup loser's medal the following season, having missed out on the 2006 final with West Ham because of suspension.

But Pompey's financial problems over the last two years are well documented - and, following relegation to League One, they need to further cut their costs.

Mullins made his name with Palace, where he made more than a third of his 605 career appearances before leaving for Upton Park in October 2003.

He has played most of his career in midfield, but can also play anywhere along the back four.

Meanwhile, Clark has also made a further addition to his backroom team, bringing in John Vaughan as his new goalkeeping coach, following Dave Watson's decision to link up again with former Blues boss Chris Hughton at Norwich.

Vaughan, 48, had the same job under Clark at his home town club, Huddersfield Town.

In his playing days, Vaughan made more than 400 appearances in an 18-year playing career that peaked under John Beck at Cambridge United in the same promotion-winning team as Dion Dublin and Steve Claridge in the early 1990s.

Vaughan had been Huddersfield since 2006, having previously coached at York City, Macclesfield Town and Grimsby Town since his playing days came to an end at Colchester in 2000.