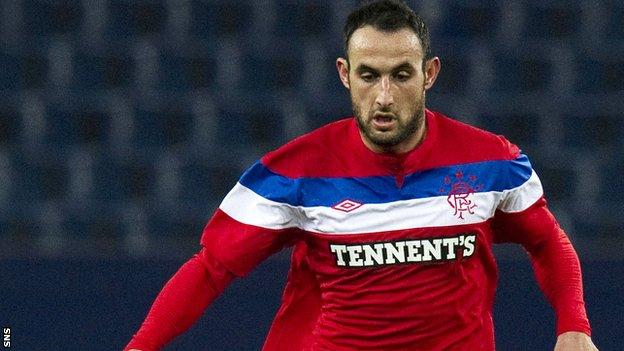 Rangers have reached an agreement with midfielder Juanma Ortiz that has seen the Spaniard's contract terminated.

The 30-year-old moved to Ibrox last summer from Almeria but returned to his former club on loan for the second half of last season.

Ortiz had agreed to have his contract switched to newco Rangers but now leaves as a free agent.

Rangers chief executive Charles Green is contesting the departure of five others who refused to join his newco.

International clearance for the transfers of Steve Davis, Kyle Lafferty, Jamie Ness, Steven Whittaker and Steven Naismith has been put on hold by the Scottish FA as Green continues to dispute the players' status.

Naismith has moved to Everton, Whittaker has signed for Norwich and Ness has joined Stoke.

Northern Irish duo Davis and Lafferty are at Southampton and Swiss side Sion respectively, while goalkeeper Allan McGregor is in talks with Turkish club Besiktas.

But Ortiz, who is expected to join Granada, will face no action from Rangers when he signs for a new club.

"The club will not have any objection to an International Transfer Certificate being provided by the SFA and the player has conducted himself in the correct manner."