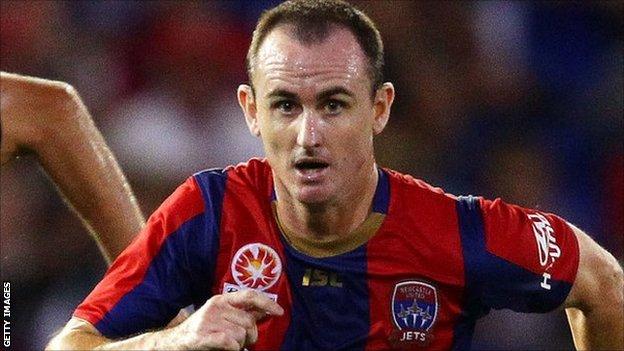 Former England striker Francis Jeffers has said he has received offers to return to English football.

Jeffers is currently training with Tranmere Rovers and is a free agent after being allowed to leave A-League club Newcastle Jets earlier this year.

"I've had a couple of preliminary offers in Australia and one or two in England as well," the 31-year-old told BBC Radio Merseyside.

"I'm going to work hard and prove my fitness. You never know in football."

He continued: "I'm only 31 and I think I've still got a bit to offer. I'll get a good pre-season under my belt and, touch wood, the niggles and slight injuries will stay away.

"You always keep striving and I'm no different. You want to be playing the game.

"Last season, I managed to play 28 games in Australia. That's a good foundation. The injuries stayed away and I think the climate helped me.

"The league is probably technically a bit better than here, but it's not as physical and it suited my style of play."

Jeffers won his solitary England cap under Sven-Goran Eriksson in February 2003, scoring in a 3-1 friendly defeat to Australia at Upton Park.

He made his debut for Everton as a 16-year-old and scored 20 goals in 60 appearances for the Toffees before joining Arsenal for £8m in 2001.

But injuries restricted him to just four Premier League starts for the Gunners and he later returned to Everton on loan.

Moves to Charlton, Blackburn and Sheffield Wednesday followed, as well as loan spells with Rangers and Ipswich.

Jeffers had another short stint in the SPL with Motherwell in 2011 and has spent the last two winters playing in Australia for Newcastle Jets.