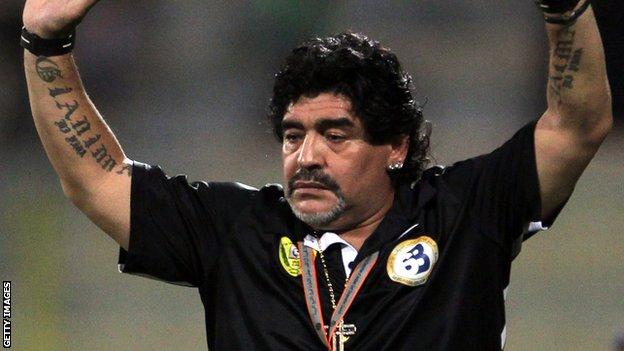 Diego Maradona has been sacked from his role as manager of United Arab Emirates side Al Wasl after 14 months in charge.

The legendary Argentinian's position had been in doubt since June when the club's entire board resigned following a trophyless season.

Maradona, 51, joined the Dubai-based club in May 2011 and still had a year to run on his contract.

1995: Appointed coach of Racing Club but again struggled to make an impact

2008: Put in charge of Argentina. Led his country to the quarter-finals of the 2010 World Cup

He leaves after a disappointing league campaign which saw Al Wasl finish eighth in the table.

Maradona, a World Cup winner with Argentina in 1986, made headlines in March this year when he confronted opposition fans.

During Al Wasl's 2-0 UAE Pro League defeat at Al Shabab, he is understood to have climbed up into the stands to protect his wife after fans allegedly started abusing players' wives and girlfriends.

Maradona had been brought in to help boost Al Wasl's profile, both on and off the pitch, yet they finished 29 points behind champions Al Ain.