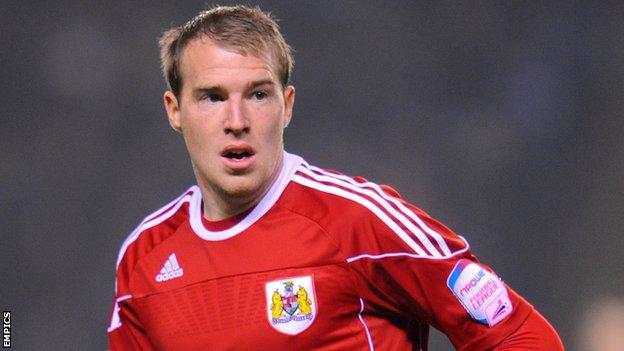 But the 26-year-old Scotsman fell out of favour and was released in May after making only 10 appearances during the last Championship campaign.

He is now training with City's cross-city rivals and is expected to be involved in their friendly against a Royal Marines XI in Exmouth.

Meanwhile, Rovers manager Mark McGhee has said he will give midfielder Joe Anyinsah a chance to prove his worth at the Memorial Stadium.

"He's got a lot of work still to do, but will be given the opportunity to prove there is a place for him here."

Anyinsah, 27, was a regular in the side under previous boss Paul Buckle but played only eight games after McGhee's appointment in January.

"At the end of last season I told one or two of the boys, including Joe, that although they were under contract it might be in their best interests to consider moving on," McGhee told the club website.

"One of those players, Craig Stanley, has now left the club.

"One thing I did say to them, though, was that it was always possible that the situation might change and that if they came back here they would be given the same chance as everyone else.

"Joe has started training quite well, has got his head down and is getting on with it. He's not a player who will cause a manager any trouble, whether he's in or out of the team.

"He's got a lot of work still to do, but will be given the opportunity to prove there is a place for him here."