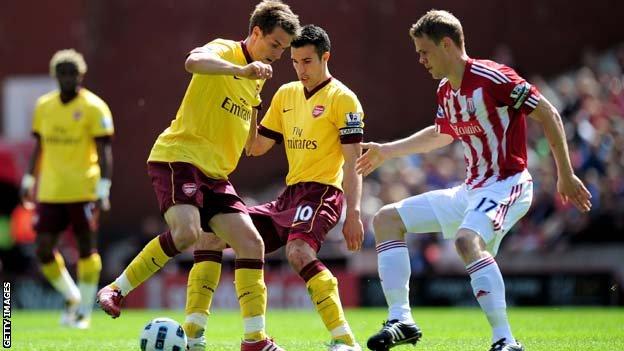 Aaron Ramsey will be consulted on whether Ryan Shawcross should be invited to represent Wales.

Ramsey's leg was broken in six places in 2010 after a tackle by Shawcross and Wales manager Chris Coleman admits his captain could be reluctant to play alongside the Stoke City defender.

"There are issues there. I'm not going to shy away from that," said Coleman.

Shawcross, born in Chester, qualifies for Wales having spent five years of compulsory education in the country.

That ruling, introduced by Fifa in 2009, has led to England-born midfielder Andy Dorman winning three caps for Wales.

Shawcross, who like Dorman was raised in north east Wales, stated in 2011 he had no intention of playing for Wales, preferring instead to attempt to make his way into the England squad.

The 24-year-old centre back has failed to do so, and Coleman is now contemplating another approach.

Ramsey ignored Shawcross's initial attempts at an apology in the immediate aftermath of the tackle that caused six fractures in his tibia and fibula.

Arsenal manager Arsene Wenger described the Shawcross challenge as "horrendous and unacceptable" and there has been significant tension between the Gunners and Stoke since.

Coleman is also keen to recruit Swansea City right-back Angel Rangel and Cardiff City defender Ben Turner to his squad before the start of the 2014 World Cup qualifiers in September.

Rangel, born in Spain, qualifies on residency grounds having lived in Wales for five years. The 29-year-old has said he would consider representing his adopted country.

Turner, eligible through his Welsh grandparents, impressed Coleman in keeping Luis Suarez quiet in the Carling Cup final against Liverpool.

"Ryan Shawcross, Ben Turner, Angel Rangel - these are good players and players that could possibly strengthen us," said Coleman.

"But if I was going to go down that road, the first person I would speak to, especially in terms of Ryan, would be Aaron.

"I'd have that conversation with Aaron first and foremost because there are issues there.

"I'm not going to shy away from that. But can we improve Wales?"