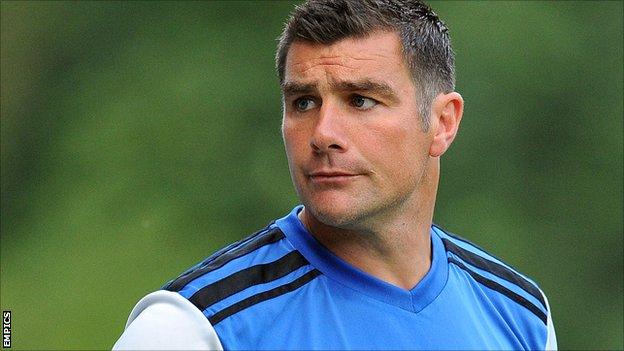 The Shakers, promoted from League Two in 2010-11, finished 14th in their first campaign back in the third tier.

Barker told BBC Radio Manchester: "This year's going to be harder. Not so many people knew a great deal about us. I think it will be more even this year.

"I don't think the top four will run away with it as much and I think the bottom eight will be a lot closer."

Whatever we go through this year, we'll probably have gone through last year. We can use that experience

In his first full year as manager at Gigg Lane, Barker guided Bury to the comfort of mid-table, although their League One place was only secured after an impressive run of results late in the season.

They finished 17 points away from a play-off position and 13 points above the relegation zone.

But Barker has said the teams coming up from League Two will strengthen the division in 2012-13.

"Swindon, Crawley, Shrewsbury and Crewe, who have just sold somebody (Nick Powell to Manchester United) for £3m, have got the finances and the hunger to keep going," he added.

"Crewe were 20-odd games unbeaten so they've got that roll that we had last year.

"The teams coming up, with all due respect, will be stronger than the teams that went down.

"Added to that, you've got Coventry, Doncaster and Portsmouth. They are all pretty big clubs and they will all be great days out to play at some nice stadiums, but they certainly won't be easy."

Bury have made four new signings ahead of the new season, adding Trevor Carson,Adam Lockwood, Marcus Marshall and Lateef Elford-Alliyu to the squad.

"Sometimes you've got to freshen things up a little bit, which is what we've done, without making major overhauls," said Barker.

"We're all a year older and a year wiser. Whatever we go through this year, we'll probably have gone through last year. We can use that experience.

"This time last year, I didn't have a clue what to expect. Now I know exactly what to expect and I'm looking to a long nine or 10 months, where there are some really big highs and some extremely low lows as well."